1. A solid right circular cone is cut into two parts at the middle of its height by a plane parallel to its base . The ratio of the volume of the small cone isto whole cone is : ? 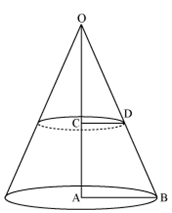 Let the height and the radius of whole cone be H  and R respectively.

The cone is divided into two parts by drawing a plane through the mid point of its height and parallel to the base.

Let the radius of the smaller cone be r cm.