In detritus food chain, the first trophic level is the dead and decaying organic matter.

Primary consumers form the next trophic level,they are 'detritivores' including protozoans, bacteria, fungi, etc which feed upon the detritus.

The grazing food chain includes the producers i.e green plants at first trophic level which is further consumed by primary  consumers i.e herbivores. These herbivores form the next trophic level.

1. DFC: transfer of energy starts from the decaying organic matter.and more energy flows through this.

2.GFC: transfer of energy starts from the producers and less energy  thru this. 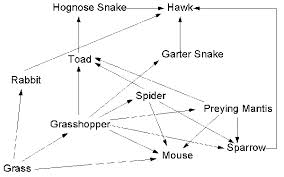