1. How the angle bisector of a parallelogram form a rectangle?

3. Find the measures of all the angles of a parallelogram is one angle is 24 degree less than twice the smallest angle?

4. AB and CD are two parallel lines and a perpendicular angle intersect AB at X and CD at Y. Prove that the bisector of the interior angle form a rectangle?

5. ABCD is a parallelogram and line segment AX bisects the angle A and C respectively, show that AX II CY.

6. Given ABC, lines are drawn through A, B, and C respectively parallel to the side BC, CA and AB forming triangle PQR. Show that BC = 1/2 QR.

7. BM and CN are perpendicular to a line passing through the vertex A of a triangle ABC, if the angle is the midpoint of BC. Prove that angle M = angle N. Hence, PQRS is a rectangle. 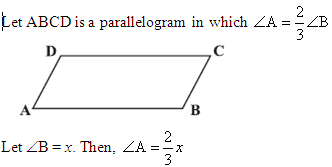 It is known that adjacent angles of a parallelogram are supplementary. 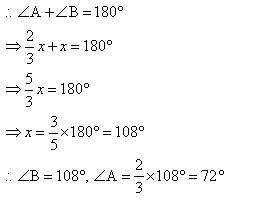 Let the smallest angle be = x0

As we know that in a IIgm opposite angles are equal

Therefore, there will be two angles with x0 each.

Since it is given that one angel is 24 degree less than twice the smallest angle, which gives 2x-24

Sum of all angles of parallelogram is =360

Therefore, the smallest angle is of 680 . 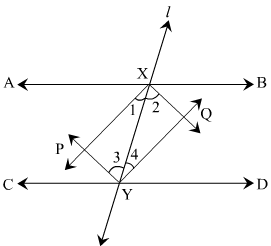 AB and CD are two parallel lines intersected by a transversal. X and Y are the points of intersection l with AB and CD respectively. XP, XQ, YP and YQ are the bisector of ∠AXY, ∠BXY, ∠CYX and ∠DYX respectively.

AB || CD and l is the transversal,

⇒ PX || YQ ...(1) (If a transversal intersect two lines in such a way that pair of alternate interior angles are equal, then the two lines are parallel)

⇒ PY || XQ ...(2) (If a transversal intersect two lines in such a way that pair of alternate interior angles are equal, then the two lines are parallel)

Hence, PXQY is a parallelogram ...(3) (A quadrilateral is parallelogram, if both pair of its opposite sides are parallel)

Due to paucity of time it would not be possible for us to provide the answers to all your queries. We are providing solutions to some your good queries. Try solving rest of the questions yourself and if you face any difficulty then do get back to us.