a) explain the significance of ecological pyramids with the help of an example?
b)why are the pyramids referred to as upright or inverted? explain.

Please find below the solution to the asked query 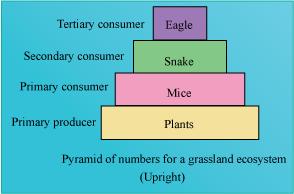 There are three types of pyramids:

(a) Pyramid of numbers: Represents number of individuals at each trophic level.

(b) Pyramid of energy: Represents amount of energy at each trophic level.

(c) Pyramid of biomass: Represents biomass at each trophic level.

The pyramids can be upright or inverted.

Upright pyramid: In this type of pyramid, the base (first trophic level) is broad and it narrows towards the apex. This condition occurs when number of producers (pyramid or number) or biomass (pyramid of biomass) or energy (pyramid of energy) is large at producer level (first trophic level) while it goes on decreasing towards apex. For example, the pyramid of biomass is upright in grasslands and forest ecosystems as the amount of biomass present at the producer level is higher than at the top carnivore level.

Inverted pyramid: In this type of pyramid, the base (first trophic level) is narrow and it widens towards apex. This condition occurs when number of producers or biomass is less at producer level than at higher trophic levels. For example, The pyramid of biomass is inverted in a pond ecosystem as the biomass of fishes far exceeds the biomass of zooplankton (upon which they feed).


Hope this information will clear your doubts about the topic.
Regards