(a) How can we separate a mixture of two miscible liquids ?

(b) Draw a neat labelled diagram of the apparatus used for separating acetone and water
(forming a miscible mixture) from their mixture.
(c) Can all mixtures of two or more miscible liquids be separated by this process?
meritnation help me fast

Distillation is used for separating a  mixture of miscible liquids into its components, when both the components are miscible with each other and the difference in the boiling points of the liquid components is more than 20-25 degree celsius.

The mixture is heated in a flask until the mixture boils, the vapours produced due to boiling of liquid are passed through  a condenser, where they are condensed back to the pure liquid which is collected separately 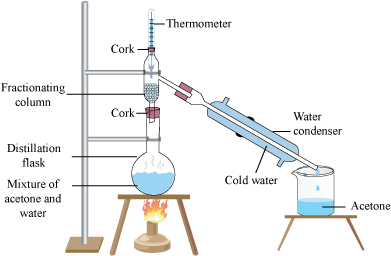 a)thru the process of distillation

b)no, only those liquids which boil without decomposition and have sufficient difference in their boiling points