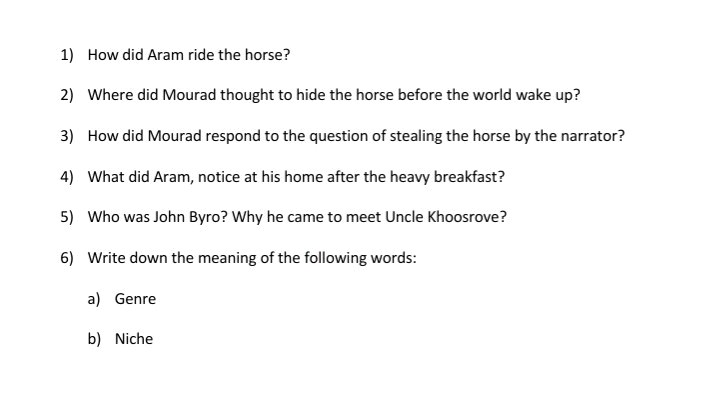 Dear Student
You are requested to post only one question per thread. Here's the answer to the 1st question. Kindly repost the other questions separately for faster and better resolution of your queries.
Mourad had a way with the horse, so he wanted to ride alone. As he kicked his heels into the horse and shouted for it to run, the horse stood on its hind legs, snorted and burst into a fury of speed that was the loveliest thing Aram had seen. Mourad raced the horse across a field of dry grass to an irrigation ditch, crossed the ditch on the horse and five minutes later returned dripping wet. The sun was coming up and it was Aram's turn to ride. Aram leaped to the back of the horse and for a moment the horse did not move. He kicked into his muscles, the horse just reared and snorted. Then it began to run and Aram didn't know what to do. Instead of running across the field to the irrigation ditch, the horse ran down the road to the vineyard of Dikran Halabuan where it began to leap over vines. The horse leapt over seven vines before Aram fell and even then it continued running.
Regards