can anyone send nitrogen cycle in any other type??

Nitrogen cycle- In the atmosphere, the concentration of nitrogen is about 78%. It is essential for plants. Nitrogen forms a structural component of many important molecules such as DNA, RNA, and other vitamins. Plants cannot absorb nitrogen from the atmosphere. Certain forms of bacteria are able to convert atmospheric nitrogen into usable forms such as nitrates and nitrites. Such nitrogen fixing bacteria are commonly found in the roots of legumes (plants of pulses) inside special structures called root nodules. These usable forms of nitrogen are absorbed by plants to produce many compounds such as amino acids, which in turn form proteins. When an animal feeds on plants, nitrogen enters its body.When plants and animals die, they start decomposing after some time. During this process, proteins are converted into nitrates and nitrites by the action of decomposing bacteria. Certain other forms of bacteria convert nitrates and nitrites into elemental nitrogen. Thus, nitrogen flows between the various components of the biosphere in a cyclical manner.

There are basically 5 steps of nitrogen cycle that help in fixing atmospheric nitrogen: * Nitrogen Fixation (N 2 to NO 3 - or NH 4 ) * Nitrification (NH 3 to NO 3 - ) * Assimiliation (here the NH 3 and NO 3 - are incorporated into the biological tissues) * Ammonification (organic nitrogen compounds to NH 3 ) * Denitrification (NO 3 - to N 2 ).

@Nizam:- We really appreciate your contribution to this forum, keep posting!! 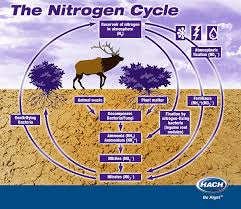 The nitrogen cycle is the process by which nitrogen is converted between its various chemical forms. This transformation can be carried out to both biological and physical processes. Important processes in the nitrogen cycle include fixation, mineralization,nitrification, and denitrification. The majority of Earth's atmosphere (approximately 78%) is nitrogen,[1] making it the largest pool of nitrogen. However, atmospheric nitrogen has limited availability for biological use, leading to a scarcity of usable nitrogen in many types of ecosystems. The nitrogen cycle is of particular interest to ecologists because nitrogen availability can affect the rate of key ecosystem processes, including primary production and decomposition. Human activities such as fossil fuel combustion, use of artificial nitrogen fertilizers, and release of nitrogen in wastewater have dramatically altered the global nitrogen cycle.