Isomerism, is a phenomenon shown by chemical compounds, due to which two or more compounds with similar molecular formula occur in nature but have different physical and chemical properties. Such compounds are called isomers.

The isomerism has been classified as two main types; 1. Structural isomerism and 2. Stereoisomerism.

The structural isomerism is that in which compounds have same molecular formula but different structures or different arrangement of atoms within the molecule.

The stereoisomerism is that in which the molecules have same atomic structures but different arrangements in the space.

Structural isomerism : It is further classified into six types:

1.)  Chain/Nuclear Isomerism: In this type, the isomer compounds have same molecular formula but different arrangement of carbon chain within the molecule.  Ex: n-butane and isobutane

2.)  Position Isomerism: The isomers have same formula but differ in the position of double or triple bond or functional groups. Ex: But-1-ene and But-2-ene.

4.)  Metamerism: The isomers having same molecular formula but different no. of carbon atoms on either side of functional groups are called metamers and the phenomenon is metamerism. Ex: Diethyl ether, Methyl n-propyl ether and Isopropyl methyl ether are metamers.

5..)  Tautomerism : In this type, the same molecular isomers exist in dynamic equilibrium with each other and this isomerism is caused by migration of H-atom from one group to another. Ex: Hydrogen Cyanide and Hydrogen isocyanide.

6.)  Ring –Chain Isomerism: Compounds with same molecular formula but open structure or ring structures, are included in this category.

Stereoisomerism; It is further classified in two types; 1. Conformational  and 2. Configurational

Conformational isomers; differ in the relative position of some of the atoms in the molecule in 3Dimensional-space due to the rotation about sigma bonds.

Configurational isomers; are those isomers which arise due to some kind of rigidity in the molecule, and these are inter converted only by bond breaking or making.

This  Configurational isomerism has been further classified in two types: Optical and Geometrical

1. Geometrical Isomerism: It is a type of space or stereo isomerism in which the isomer molecules have the same structural formula but they differ in spatial arrangement or position of atoms or groups around the double (=) bond.

It gives two types of Isomers; Cis-isomer and Trans-isomer

here similar groups are at same side of the double bond.

There are two conditions which are necessary for geometrical isomerism;

b.Each of the two carbon atoms of the double bond must have different substituent which may be same or different.

2.Optical Isomerism: It is a type of stereo isomerism in which the isomer molecules have the tendency to rotate plan of polarized light and also which execute chiral behavior. These compounds are called as Optically active compounds.

For optical isomerism, the necessary conditions are;

2. Presence of a disymmetric or chiral molecule which makes a non superimposable mirror images of the compound when watched in a mirror. ( Chiral molecule is that in which a carbon is attached with four different groups.)

3. The isomers should have non superimposable mirror images, and these images are called the enentiomrs.

For ex: in case of lactic acid which contains chiral carbon; 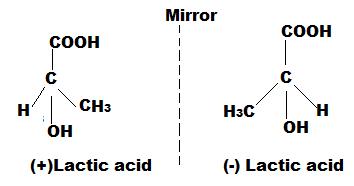