times the corresponding side of ΔABC.

Construct a triangle of sides 4 cm, 5cm and 6cm and then a triangle similar to it whose sides are

of the corresponding sides of the first triangle.

does both questions have same method? pls clarify it!!!

Sum of all interior angles in a triangle is 180°.

The required triangle can be drawn as follows.

Draw a ray BX making an acute angle with BC on the opposite side of vertex A.

Join B3C. Draw a line through B4 parallel to B3C intersecting extended BC at C'.

Through C', draw a line parallel to AC intersecting extended line segment at C'. ΔA'BC' is the required triangle. 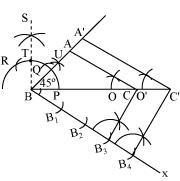 The construction can be justified by proving that

This justifies the construction.