DRAW THE LABELLED DIAGRAM OF PARENCHYMA, COLLENCHYMA AND SCLEVENCHYMA. WRITE THE DIFFERENCE BETWEEN THEM?

The diagrams of parenchyma, collenchyma and sclerenchyma are given in our study material in the animation video at the following link.

For their difference, kindly refer to the following link. 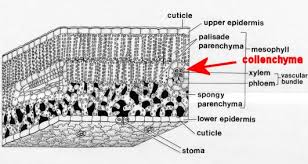 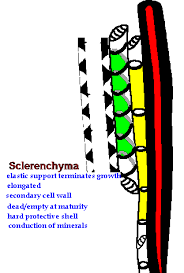 The parenchyma are the functional parts of an organ in the body. This is in contrast to the stroma, which refers to the structural tissue of organs, namely, the connective tissues.

In cancer, the parenchyma refers to the actual mutant cells of the single lineage, whereas the stroma is the surrounding connective tissue and associated cells that support it.

Early in development the mammalian embryo has three distinct layers: ectoderm (external layer), endoderm (internal layer) and in between those two layers the middle layer or mesoderm. The parenchyma of most organs is of ectodermal (brain, skin) or endodermal origin (lungs, gastrointestinal tract, liver, pancreas). The parenchyma of a few organs (spleen, kidneys, heart) is of mesodermal origin. The stroma of all organs is of mesodermal origin.

The first use of ‘collenchyma’ /kɵˈlɛŋkɪmə/ was by Link (1837) who used it to describe the sticky substance on Bletia (Orchidaceae, monocots) pollen. Complaining about Link’s excessive nomenclature, Schleiden (1839) stated mockingly that the term ‘collenchyma’ could have more easily been used to describe elongated subepidermal cells with unevenly thickened cells.

Collenchyma tissue is composed of elongated cells with irregularly thickened walls. They provide structural support, particularly in growing shoots and leaves. Collenchyma tissue makes up things such as the resilient strands in stalks of celery. Collenchyma cells are usually living, and have only a thick primary cell wall[6] made up of cellulose and pectin. Cell wall thickness is strongly affected by mechanical stress upon the plant. The walls of collenchyma in shaken plants (to mimic the effects of wind etc.), may be 40–100% thicker than those not shaken.

Parenchyma (/pəˈrɛŋkɪmə/, para meaning "beside", chyma meaning "in filling") is a versatile ground tissue. It forms, among other things, the cortex and pith of stems, the cortex of roots, the mesophyll of leaves, the pulp of fruits, and the endosperm of seeds. Parenchyma cells are living cells and may remain meristematic at maturity—meaning that they are capable of cell division if stimulated. They have thin but flexible cellulose cell walls, and are generally polyhedral when close-packed, but can be roughly spherical when isolated from their neighbors. They have large central vacuoles, which allow the cells to store and regulate ions, waste products, and water.
Cross section of a leaf showing various ground tissue types


Parenchyma cells have a variety of functions:
In leaves, they form the mesophyll and are responsible for photosynthesis and the exchange of gases,[1] parenchyma cells in the mesophyll of leaves are a specialized parenchymatous tissue known as chlorenchyma (parenchyma with chloroplasts).
Storage of starch, protein, fats, oils and water in roots, tubers (e.g. potato), seed endosperm (e.g. cereals) and cotyledons (e.g. pulses and groundnut)
Secretion (e.g. hydathodes, nectaries and cells lining the inside of resin ducts)
Wound repair and the potential for renewed meristematic activity
Other specialized functions such as aeration (aerenchyma) and support

The form of parenchyma cells varies with their function. In the spongy mesophyll of a leaf, parenchyma cells range from near-spherical and loosely arranged with large intercellular spaces, to branched or stellate, mutually interconnected with their neighbours at the ends of the arms to form a three-dimensional network, like in the red kidney bean Phaseolus vulgaris and other mesophytes. These cells, along with the epidermal guard cells of the stoma, form a system of air spaces and chambers that regulate the exchange of gases. In some works the cells of the leaf epidermis are regarded as specialised parenchymal cells, but the modern preference has long been to classify the epidermis as plant dermal tissue, and parenchyma as ground tissue. Sclerenchyma /sklɜrˈrɛŋkɪmə/ is the supporting tissue in plants. Two types of sclerenchyma cells exist: fibres and sclereids. Their walls consist of cellulose, hemicellulose and lignin. Sclerenchyma cells are the principal, supporting cells in plant tissues that have ceased elongation. Sclerenchyma fibres are of great economical importance, since they constitute the source material for many fabrics (flax, hemp, jute, ramie).

Unlike the collenchyma, mature sclerenchyma is composed of dead cells with extremely thick cell walls (secondary walls) that make up to 90% of the whole cell volume. The term "sclerenchyma" is derived from the Greek σκληρός ("sklē-rós"), meaning "hard". It is the hard, thick walls that make sclerenchyma cells important strengthening and supporting elements in plant parts that have ceased elongation. The difference between fibres and sclereids is not always clear. Transitions do exist, sometimes even within one and the same plant.

Fibres or bast are generally long, slender, so-called prosenchymatous cells, usually occurring in strands or bundles. Such bundles or the totality of a stem's bundles are colloquially called fibres. Their high load-bearing capacity and the ease with which they can be processed has since antiquity made them the source material for a number of things, like ropes, fabrics or mattresses. The fibres of flax (Linum usitatissimum) have been known in Europe and Egypt for more than 3000 years, those of hemp (Cannabis sativa) in China for just as long. These fibres, and those of jute (Corchorus capsularis) and ramie (Boehmeria nivea, a nettle), are extremely soft and elastic and are especially well suited for the processing to textiles. Their principal cell wall material is cellulose.

Contrasting are hard fibres that are mostly found in monocots. Typical examples are the fibres of many grasses, agaves (sisal: Agave sisalana), lilies (Yucca or Phormium tenax), Musa textilis and others. Their cell walls contain, besides cellulose, a high proportion of lignin. The load-bearing capacity of Phormium tenax is as high as 20–25 kg/mm2, the same as that of good steel wire (25 kg/ mm2), but the fibre tears as soon as too great a strain is placed upon it, while the wire distorts and does not tear before a strain of 80 kg/mm2. The thickening of a cell wall has been studied in Linum. Starting at the centre of the fibre are the thickening layers of the secondary wall deposited one after the other. Growth at both tips of the cell leads to simultaneous elongation. During development the layers of secondary material seem like tubes, of which the outer one is always longer and older than the next. After completion of growth the missing parts are supplemented, so that the wall is evenly thickened up to the tips of the fibres.

Fibres usually originate from meristematic tissues. Cambium and procambium are their main centers of production. They are usually associated with the xylem and phloem of the vascular bundles. The fibres of the xylem are always lignified, while those of the phloem are cellulosic. Reliable evidence for the fibre cells' evolutionary origin from tracheids exists. During evolution the strength of the tracheid cell walls was enhanced, the ability to conduct water was lost and the size of the pits reduced. Fibres that do not belong to the xylem are bast (outside the ring of cambium) and such fibres that are arranged in characteristic patterns at different sites of the shoot.
Sclereids- Fresh mount of a sclereid Long tapered sclereids supporting a leaf edge in Dionysia kossinskyi Sclereids are a reduced form of sclerenchyma cells with highly thickened, lignified walls. These have a shape of a star.

They are small bundles of sclerenchyma tissue in plants that form durable layers, such as the cores of apples and the gritty texture of pears. Sclereids are variable in shape. The cells can be isodiametric, prosenchymatic, forked or elaborately branched. They can be grouped into bundles, can form complete tubes located at the periphery or can occur as single cells or small groups of cells within parenchyma tissues. But compared with most fibres, sclereids are relatively short. Characteristic examples are brachysclereids or the stone cells (called stone cells because of their hardness) of pears (Pyrus communis) and quinces (Cydonia oblonga) and those of the shoot of the wax-plant (Hoya carnosa). The cell walls fill nearly all the cell's volume. A layering of the walls and the existence of branched pits is clearly visible. Branched pits such as these are called ramiform pits. The shell of many seeds like those of nuts as well as the stones of drupes like cherries or plums are made up from sclereids.These structures are used to protect other cells.

I think This will help you.