Dear student,
Galileo dropped different objects of different masses from a particular height as it is famous that he performed this experiment at the Leaning tower of Pisa. He observed that they fell with the same speed, independent of their respective masses.
He observed that objects moving down an inclined plant accelerate while the objects moving up retard. He observed that object moving on a frictionless horizontal plane move with constant velocity.
His experiment on double inclined plane includes releasing of ball from rest on smooth planes. The ball rolls down and climbs up the other plane. In absence of friction, the final height of ball is same as its initial height. He reduced the slope of the second plane and repeated the experiment. The ball travels longer distance. When the slope of the second plane is reduced to zero, the ball travels infinite distance. He proposed the law of inertia states that “If the net external force is zero, a body at rest continues to remain at rest and a body in motion continues to move with uniform velocity. This property of body is called as inertia which refers to resistance to change. 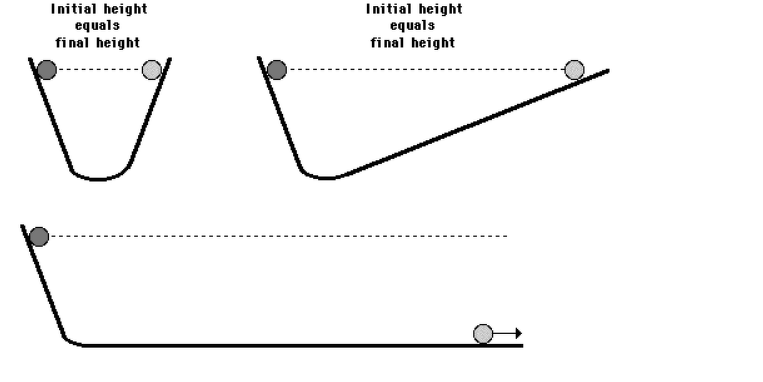 Dear friend, Galileo thought that a ball, rolling or sliding down a hill without friction, would run up to the same height on an opposite hill. ... Galileo's conclusion from this thought experiment was that no force is needed to keep an object moving with constant velocity. Newton took this as his first law of motion. With regards By R . K

Thnxzz
What are you looking for?