Relationship between AR and MR (When Price Falls with rise in output):

When firms can increase their volume of sales only by decreasing the price, then AR falls with increase in sale. It means, revenue from every additional unit (i.e. MR) will be less than AR. As a result, both AR and MR curves slope downwards from left to right. This relationship can be better understood through Fig. 7.4:
both MR and AR fall with increase in output. However, fall in MR is double than that in AR, i.e., MR falls at a rate which is twice the rate of fall in AR. As a result, MR curve is steeper than the AR curve because MR is limited to one unit, whereas, AR is derived by all the units. It leads to comparatively lesser fall in AR than fall in MR. It must be noted that MR can fall to zero and can even become negative. However, AR can be neither zero nor negative as TR it is always positive.

Relationship between TR and MR (When Price Falls with rise in output):

When more of output can be sold only by lowering the price, then revenue from every additional unit (i.e. MR) will fall. MR is the addition to TR when one more unit of output is sold. So, TR will increase when MR is positive, TR will fall when MR is negative and TR will be maximum when MR is zero. This relationship can be better understood with the help of Fig. 7.8:
In Fig. 7.8, the TR curve rises as long as MR is positive. It reaches its highest point (point A) when MR is zero (point B) and it starts declining when MR becomes negative. 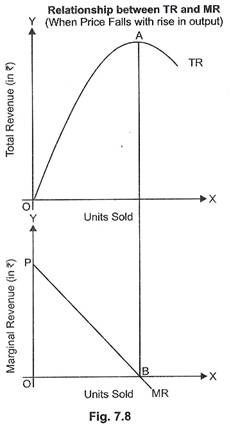 The relationship can be summed up as under: