explain the structure of a dicotyledonous seed

Seed may be defined as the mature ovule that contain an embryo covered by seed coat.


A typical dicotyledonous seed is covered by a protective covering called seed coat. Outer layer of seed coat is called testa while inner layer is called tegmen.
There is a scar like structure called hilum present on seed coat through which seed remain attached to fruit.
micropyle, a small opening is present above the hilum.
Inside seed coat embryo is present which consist of an embryonal axis on which two cotyledons become laterally attached..Radicle and plumule are present on embryonal axis. Radicle is called embryonic shoot while plumule is called shoot tip.
In some dicotyledonous seeds endosperm remain present as a food storage tissue. These are called endospermic seeds. For example castor seeds.
In some plants such as gram seeds, endosperm is not present inside seeds. Such seeds are called non- endospermic seeds 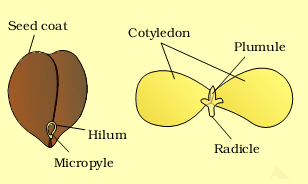