Explain the working and applications of sonar.

SONAR stands for sound navigation and ranging . SONAR is a device which is used by ships and submarines to locate position of other vessels in the ocean. These are of two types. One is passive, which only detects the incoming. Another one is active SONAR which transmits sound pulses and detects the reflected echoes to detect presence of other sea vessels.

Principle behind SONAR is reflection of sound.

The sound sent is reflected back from the sea bed which is known as echo.

Let the depth of the ocean be D

For perpendicular focusing of the sonar

Where V = speed of sound in water

t = time after the echo is detected.

Thus, depth of the ocean is evaluated.

Sonar is a very useful technique which can help determine what lies beneath the ship, boat or a submarine. It has been used to discover shipwrecks, lost treasures, sunken features etc.

It is also used in military for detecting the presence of enemy ships .

THe sonar consists of a transmitter that transmits and produces ultrasonic waves  and a detctor that detects the reflected back waves, which is converted into electronic signals.The distance(d) of the under-water  object is calculated from the time(t) taken by the sound wave to return with speed(v) is given by 2d= v x t.This is called " echo-ranging".

Sonar is simply making use of an echo. When an animal or machine makes a noise, it sends sound waves into the environment around it. Those waves bounce off nearby objects, and some of them reflect back to the object that made the noise. It's those reflected sound waves that you hear when your voice echoes back to you from a canyon. Whales and specialized machines can use reflected waves to locate distant objects and sense their shape and movement.

The distance(d) of the under-water object is calculated from the time(t) taken by the sound wave to return with speed(v) is given by 2d= v x t.This is called " echo-ranging".

The range of low-frequency sonar is remarkable. Dolphins and whales can tell the difference between objects as small as a BB pellet from 50 feet (15 meters) away, and they use sonar much more than sight to find their food, families, and direction. The LFA sonar being tested by the military can travel thousands of miles, and could cover 80% of the earth's oceans by broadcasting from only four points. The frequency that both whales and the military use falls between 100 and 500 Hz. Whales send signals out between 160 and 190 Db, the Navy has tested its sonar signals at levels up to 235 Db.

Sonar (originally an acronym for SOund Navigation And Ranging) is a technique that uses sound propagation (usually underwater, as in submarine navigation) to navigate, communicate with or detect objects on or under the surface of the water, such as other vessels. Two types of technology share the name "sonar": passive sonar is essentially listening for the sound made by vessels; active sonar is emitting pulses of sounds and listening for echoes. Sonar may be used as a means of acoustic location and of measurement of the echo characteristics of "targets" in the water. Acoustic location in air was used before the introduction of radar. Sonar may also be used in air for robot navigation, and SODAR (an upward looking in-air sonar) is used for atmospheric investigations. The term sonar is also used for the equipment used to generate and receive the sound. The acoustic frequencies used in sonar systems vary from very low (infrasonic) to extremely high (ultrasonic). The study of underwater sound is known as underwater acoustics or hydroacoustics. 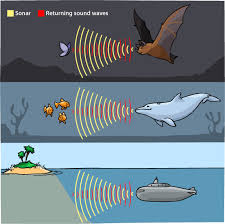