Dear Student,
The life cycle of silk moth starts when a female silk moth lays eggs. The caterpillar or larvae are hatched from the eggs of the silk moth. The silkworms feed on mulberry leaves and give rise to pupa. In pupa stage, a weave is netted around by the silkworm to hold itself. After that it swings its head, spinning a fibre made of a protein and becomes a silk fibre. Several caterpillars form a protective layer around pupa and this covering is known as the cocoon. The silk thread (yarn) is obtained from the silk moth’s cocoon. The life cycle of silkworm is explained below in details. 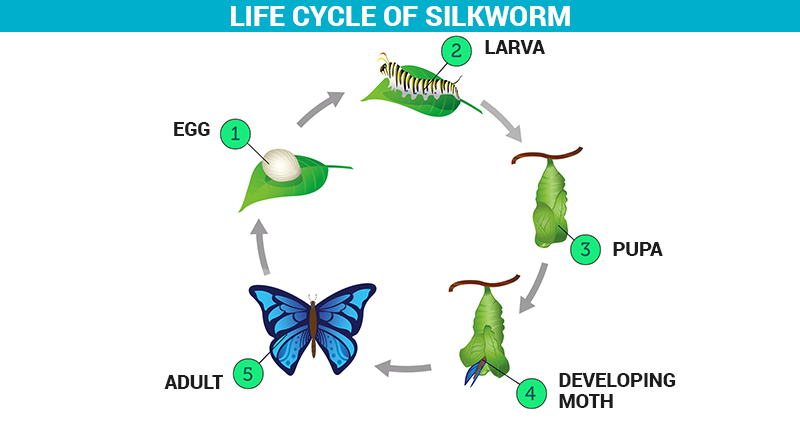 An egg is the first stage of the life cycle of silkworm. The egg is laid by a female moth which is mostly the size of small dots. A female moth lays more than 350 eggs at a time.in the springtime, the eggs hatch due to the warmth in the air. This procedure happens once in every year.

A hairy silkworm arises after the eggs crack. In this stage of silkworms, the growth happens. they feed on mulberry leaves and consume a large amount of these leaves for around 30 days before going to the next stage.

In this stage, silkworms spin a protective cocoon around itself. It is the size of a small cotton ball and is made of a single thread of silk.

Pupa stage is a motionless stage. In this stage, people kill the pupa by plunging the cocoon into boiling water and unwind the silk thread.

In this stage, the pupa changes into an adult moth. The female moth lays eggs after mating and thus the life cycle of silkworm begins again.

Extracting silk from the cocoon is known as the processing of silk. Silk is separated from cocoon by exposing it to sunlight. After that reeling of silk is done, the process of unwinding silk from a cocoon. Silk thread is then bleached. Silk fibre is then spun into silk threads.