how did the partition affect life in delhi

1) partition of of india 1947 led to a massive transfer of population, death, chaos on both sides of  borders.

2) when the refugees did not find a place to live in they forced muslims to sell their properties.

3) partition changed the life of migrants and refugees.

In 1947, due to the Partition, there was a massive transfer of populations on both sides of the new border. As a result, the population of Delhi swelled (nearly 500,000 people were added to Delhi’s population). Delhi became a city of refugees, with people living in camps, schools, military barracks and gardens. The riots accompanying the Partition led to the killing of thousands of people, and the looting and burning of their houses. Over two-third of the Delhi Muslims migrated, and almost 44,000 homes were abandoned. Their places were taken over by Sikh and Hindu refugees from Pakistan. These refugees were mostly rural landlords, lawyers, teachers, traders and shopkeepers. After Partition, their lives changed as they took up new jobs as hawkers, vendors, carpenters and ironsmiths. The influx of Sikh and Hindu refugee population and the outflow of the Muslim population changed the social milieu of Delhi. An urban culture largely based on Urdu was overshadowed by new tastes and sensibilities, in food, dress and the arts.

1.The population of Delhi swelled,the kinds of jobs people did changed.

2.The culture of the city became different.

3.Thousands of people were killed and their homes were looted and burned.

5.It shattered the economy and life of the people of Delhi.

i don't know this answer

Sorry I didn't know the ans

The partision of india 1947 led to a massive transfer of populations on both sides of the new border. As a result population of delhi swelled,the kinds of jobs people did changed, and the culture of the city becamedifferent....thousands of people in were killed and their homes looted and burned 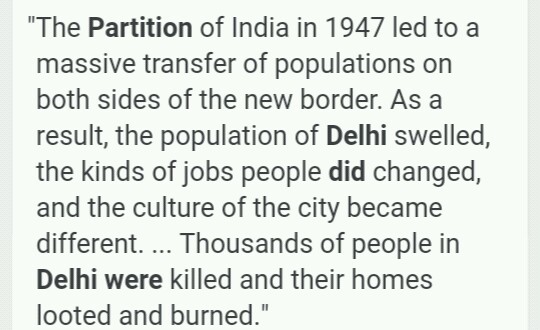 Days before independence and partition, fierce rioting began . Thousands of people in Delhi were killed and their homes were looted and burnt. As streams of Muslims left Delhi for Pakistan , their place was taken by equally large numbers of Sikhs and Hindu refugees from Pakistan . Refugees reamed the streets of shahjanabad searching for empty homes to occupy . At times they forced Muslims to leave or sell their properties . Over two - thirds of Delhi Muslims migrated , almost 44000 homes were abondand. 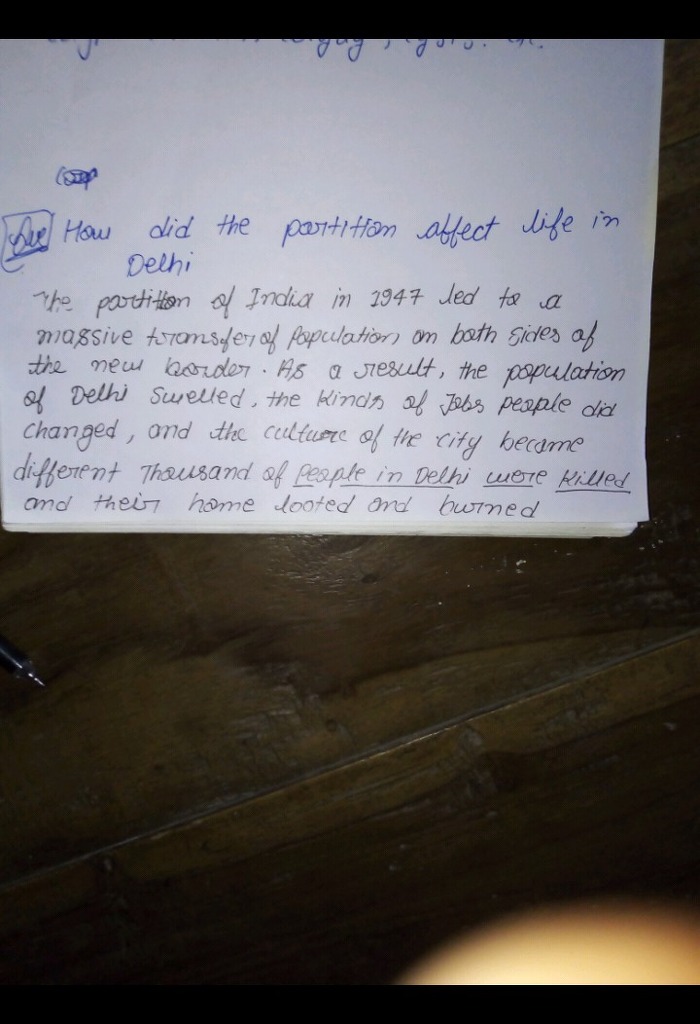 PARTITION HAPPENED IN 1947 AND THIS CAUSED A MASSIVE TRANSFER IN POPULATION FROM PAKISTAN TO DELHI AND VICE VERSA , AS A RESULT POPULATION IN DELHI INCREASED RAPIDLY. JOBS AND CULTURE CHANGED . MOST MIGRANTS WERE FROM PUNJAB AND HOUSES WERE NOT ENOUGH. THEY ALL HAD TO STAY IN REFUGEE CAMPS, SCHOOLS ,ETC... WHILE SOME GOT TO STAY IN HOUSES ABANDONED  BY PEOPLE WHO LEFT FOR PAKISTAN. NEW COLONIES LIKE TILAK NAGAR GREW  DURING THAT TIME. MIGRANTS COMING TO DELHI WERE  MOSTLY RURAL LANDLORDS, TEACHERS, LAWYERS, ETC... DUE TO PARTITION THEY HAD TO TAKE UP JOBS LIKE HAWKERS , VENDORS, CARPENTERS AND IRON SMITHS. THESE WERE THE CHANGES WHICH HAPPENED DUE TO PARTITION