How do generation,conduction and transmition of an impulse takes place


Whenever we touch any object the immediate response of the nervous system is to send signals through nerves to the spinal cord. The neurons then transmit the signal from spinal cord to brain. Brain cells transmit the signal along their axons to the neighbouring neurons via synapses. When the information in form of electrical signals reaches the axon’s end the voltage trigger releases the neurotransmitters which are brain’s chemical messengers. The neurotransmitters are travelled across the synapse till they reach potassium ion channels. Potassium ions enter the cells making inside of the cell more positive than outside. When the signal reaches axon terminal calcium ions move inside the cell and vesicles filled with neurotransmitters are expelled out of the cell. 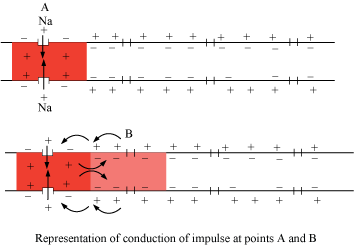 Nerve impulse is an electrical signal that travels through the nerve cells. When there is any change in our body state which is detected by the nerve receptors, they send the information or message regarding this change through nerve impulses to the brain. Synapse exists at the end of each neuron to transmit nerve impulses from one neuron to another. It permits a neuron to pass electric impulse to another cell. At the synapse the plasma membrane of signal passing neuron comes in contact to the membrane of the neuron where the signal has to be sent. The signal is then passed through the membranes to the next neuron.