how does human respiratory system works

Dear student,
Working of the human respiratory system is as follows:
1)The human respiratory system consists of nostrils, nasal cavity, pharynx, trachea, bronchi, bronchioles, alveoli and lungs.
2)The passage of the respiratory tract is as follows: External nostrils→Nasal cavity →Pharynx →Larynx →Trachea →Bronchi →Bronchioles →Alveoli.
3)The air enters through a pair of nostrils into the nasal cavity.
4)The nasal chamber filters the air through nostril hairs and prevents the entry of dust and microbes.The nasal chamber opens into the pharynx.
5)The pharynx is the common passage for both food and air.It leads to trachea following the voice box larynx.The trachea is a windpipe of about 11 cm in length which opens into the thoracic cavity.
6)The trachea after entering into thoracic cavity divides into the primary bronchus.
7)Inside the lungs, the bronchus divides into bronchioles and each bronchiole terminate into the atrium.
8)Each atrium bears 6 air sacs or alveoli.
9)Alveoli are the place where the respiratory exchange of gases occurs in the blood.
Mechanism of breathing:
Breathing occurs with the help of intercostal muscles between the ribs and diaphragm.During inspiration, intercostal muscles contract and push the ribs outward and upwards.The diaphragm becomes flat which increases the thoracic volume.Thus, air enters into the lungs.
During exhalation or expiration, the intercostal muscles relax, the ribs move inwards and the diaphragm becomes relaxed. This decreases the volume of the thoracic cavity and the air moves out of the lungs.

Cellular respiration:
The actual site for gaseous exchange is alveoli in the lungs which are in direct contact with the blood capillaries. The air exchange with the help of the diffusion.The blood takes the oxygen to all body parts with the help of haemoglobin.The concentration of oxygen is higher in the inhaled air than the venous blood present in alveolar capillaries.Hence oxygen diffuses from alveoli to blood capillaries.Similarly, carbon dioxide concentrations more in capillaries than alveoli.Thus, carbon dioxide diffuses into the alveoli and move out of the lungs.

During this cellular respiration, the glucose is oxidised to form the carbon dioxide and water and a large amount of energy. 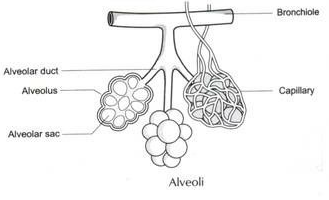