The revolt leaders are:

give some points about the leaders of revolt of 1857

Babu Kuvwar Singh was nearly eighty and in failing health when he was called upon to take up arms. The great warrior that he was, he gave a good fight and harried British forces for nearly a year and remained invincible till the end. Kunwar Singh assumed command of the soldiers who had revolted at Danapur on July 5, . Two days later he occupied Arrah, the district headquarter. Major Vincent Eyre relieved the town on August 3, defeated Kunwar Singh's force and destroyed Jagdishpur. Kunwar Singh left his ancestral village and reached Lucknow in December 1857. In March 1858 he occupied Azamgarh. However, he had to leave the place soon. Pursued by Brigadier Douglas, he retreated towards his home in Bihar. On April 23, Kunwar Singh had a victory near Jagdishpur over the force led by Captain Le Grand, 26 April 1858 he died in his village. The mantle of the old chief now fell on his brother Amar Singh who, despite heavy odds, continued the struggle and for a considerable time ran a parallel government in the district of Shahabad. In October 1859, Amar Singh joined the rebel leaders in the Nepal Terai
Delhi :- Bhakt Khan

When sepoys in Meerut revolted against the British in May 1857, Bakht Khan organized, trained and built up the Rohilla sepoys and then left for Delhi.

By the time Khan arrived at Delhi on July 1, 1857, the city had already been taken by rebel forces and the Mughal ruler Bahadur Shah II had been proclaimed Emperor of India. The emperor's eldest son, Mirza Mughal, also called Mirza Zahiruddin, had been given the title of chief general, but this prince had no military experience. This was the time when Bakht Khan along with his forces arrived in Delhi on Wednesday 1 July 1857. With his arrival the leadership position did improve. Bakht Khan's superior abilities quickly became evident, and the emperor gave him actual authority and the title of Saheb-I-Alam Bhadur, or Lord Governor General. Khan was virtual commander of the sepoy forces, although Mirza Zahiruudin was still the commander in chief.

Bakht Khan faced many problems which needed his immediate attention. The first and foremost problem was financial, to solve which he obtained from the Emperor authority to collect taxes. The second problem was the logistical one of supplies, which became more and more acute with the passage of time and even more so when British forces assaulted the city in September. The British had many spies and agents in the city and were constantly pressurizing Bahadur Shah to surrender. The situation around Delhi proceeded to deteriorate rapidly; Bakht Khan's leadership could not compensate for the rebels' lack of organization, supplies and strength on the part of their monarch. Delhi was besieged on June 8. On September 14 the British assaulted the Kashmiri Gate and Badur Shah fled to Humayun's Tomb before surrendering to the British, against Bakht Khan's pleas, on September 20, 1857.

Bakht Khan himself fled Delhi and joined rebel forces in Lucknow and Shahjahanpur. In 1857 he was mortally wounded and died unattended in the dense forests of Terai.


Awadh :- Begum Hazrat Mahal
During India's First War of independence (1857-58), she led a band of her supporters against the British, and was even able to seize the control of Lucknow. She declared her son Birjis Qadra as the king of Awadh. She is believed to have worked in close association with other leaders of the India's First War of Independence, including Nana Sahib. When the forces under the command of the British re-captured Lucknow and most part of the Awadh, she was forced to retreat. She turned down all offers of amnesty and allowances by the British rulers.

Begum was not only a strategist but also fought on the battlefield. She had rejected the offer to accept a pension of Rs 12 lakh by British. When her forces lost ground, she fled Oudh and tried to organise soldiers again in other places.

During the initial stages of the Indian rebellion of 1857, Nana Sahib declared his loyalty to the British. He won the confidence of Hillersdon, the collector of Kanpur. It was planned that Nana Sahib would assemble a force of 1,500 soldiers, in case the rebellion spread to Kanpur.

On June 5 1857, at the time of rebellion by the East India Company at Kanpur, the British contingent had taken refuge at an entrenchment in the southern part of the town. Amid the prevailing chaos in Kanpur, Nana Sahib and his forces entered the British magazine situated in the northern part of the town. The soldiers of the 53rd Native Infantry, which was guarding the magazine, thought that Nana Sahib had come to guard the magazine on behalf of the British. However, once he entered the magazine, Nana Sahib announced that he was a participant in the rebellion against the British, and intended to be a vassal of Bahadur Shah II.

After taking possession of the Company treasury, Nana Sahib advanced up the Grand Trunk Road. He wanted to restore the Maratha confederacy under the Peshwa tradition, and decided to capture Kanpur. On his way, Nana Sahib met the rebel Company soldiers at Kalyanpur. The soldiers were on their way to Delhi, to meet Bahadur Shah II. Nana Sahib wanted them to go back to Kanpur, and help him in defeating the British. The soldiers were reluctant at first, but decided to join Nana Sahib, when he promised to double their pay and reward them with gold, if they were to destroy the British entrenchment.

While this was happening in Jhansi, on May 10, 1857 the Sepoy (soldier) Mutiny of India started in Meerut. This would become the starting point for the first war of Indian Independence. It began after rumours were put about that the new bullet casings for their Enfield rifles were coated with pork/beef fat, pigs being taboo to Muslims and cows sacred to Hindus and thus forbidden to eat. There is no evidence that this was the case, and British commanders insisted on their use and started to discipline anyone who disobeyed. During this rebellion many British civilians, including women, and children were killed by the people of India. The rebellion spread from Meerut through the Gangetic plain since many Hindu priests and seers had been predicting the end of British rule just 100 years after the Battle of Plassey (1757). The British wanted to end the rebellion quickly.

Meanwhile, unrest began to spread throughout India and in May of 1857, the First War of Indian Independence erupted in numerous pockets across the northern subcontinent. During this chaotic time, the British were forced to focus their attentions elsewhere, and Lakshmi Bai was essentially left to rule Jhansi alone. During this time, her qualities were repeatedly demonstrated as she was able swiftly and efficiently to lead her troops against skirmishes breaking out in Jhansi. Through this leadership Lakshmi Bai was able to keep Jhansi relatively calm and peaceful in the midst of the Empire's unrest.

Up to this point, she had been hesitant to rebel against the British, and there is still some controversy over her role in the massacre of the British HEIC officials and their wives and children on the 8th June 1857 at Jokhan Bagh. Her hesitation finally ended when British troops arrived under Sir Hugh Rose and laid siege to Jhansi on 23rd March 1858. She rallied her troops around her and fought fiercely against the British. An army of 20,000, headed by the rebel leader Tatya Tope, was sent to relieve Jhansi and to take Lakshmi Bai to freedom. However, the British, though numbering only 1,540 in the field so as not to break the siege, were better trained and disciplined than the "raw recruits," and these inexperienced soldiers turned and fled shortly after the British began to attack on the 31st March. Lakshmi Bai's forces could not hold out and three days later the British were able to breach the city walls and capture the city. Yet Lakshmi Bai escaped over the wall at night and fled from her city, surrounded by her guards, many of whom were from her women's military.

Along with the young Damodar Rao, the Rani decamped to Kalpi along with her forces where she joined other rebel forces, including those of Tatya Tope. The Rani and Tatya Tope moved on to Gwalior, where the combined rebel forces defeated the army of the Maharaja of Gwalior after his armies deserted to the rebel forces. They then occupied the strategic fort at Gwalior. However on the second day of fighting, on 18 June 1858, the Rani died.

Liaqat AH was a maulvi from Allahabad who had donned the leadership of rebel army there. After his defeat on 12th July 1857 he escaped with his wife and a few followers to Bombay via Sachin (near Surat). But before he could board the ship for Haj he was captured and transported to the Andamans where he died.

When Nana Sahib's forces attacked the British entrenchment in June, 1857, General Wheeler's contingent incurred heavy losses as a result of successive bombardments, sniper fire, and assault. Also slow supplies of food, water and medicine added to their misery and they decided to surrender, in return for a safe passage to Allahabad. But despite Nana Sahib's arrangements, some confusion at the Satichaura ghat led to attacks on the departing British by the rebel sepoys, and were either killed or captured.The surviving British women and children were moved from the Savada House to Bibighar ("the House of the Ladies"), a villa-type house in Kanpur. Retaliation occurred as Company forces started approaching Kanpur, and Nana Sahib's bargaining attempts had failed(in exchange for hostages). Nana Sahib was informed that the British troops led by Havelock and Neill were indulging in violence against the Indian villagers.Nana Sahib, and his associates, including Tatya Tope and Azimullah Khan, debated about what to do with the captives at Bibighar. Some of Nana Sahib's advisors had already decided to kill the captives at Bibighar, as revenge for the murders of Indians by the advancing British forces. The details of the incident, such as who ordered the massacre, are not clear.
Mangal Pandey -

Mangal Pandey, a resident of Ballia, in Uttar Pradesh, was a soldier in the army of the British East India Company. At the time of the First War of Independence, the company introduced new rifles, which used animal fat for greasing the cartridges. Influenced by the example of his compatriots in Berhampur, Mangal Panday refused to use the greased cartridges and broke into open mutiny on March 29, 1857, at Barrackpore near Calcutta and urged his comrades to join him.

Surrounded by guards and European Officers, he tried to commit suicide by shooting himself and was seriously wounded. He was court-martialled on April 6, and hanged at Barrackpore on April 8, 1857.

Indian Posts & Telegraphs Department is privileged to issue four commemorative stamps in the memory of these great Freedom Fighters.

As the Indian rebellion of 1857 spread, Sepoy regiments seized Delhi. Seeking a figure that could unite all Indians, Hindu and Muslim alike, most rebelling Indian kings and the Indian regiments accepted Zafar as the Emperor of India,, under whom the smaller Indian kingdoms would unite until the British were defeated. Zafar was the least threatening and least ambitious of monarchs, and the legacy of the Mughal Empire was more acceptable a uniting force to most allied kings than the domination of any other Indian kingdom.


Bahadur Shah died in exile on 7 November 1862. He was buried near the Shwedagon Pagoda in Yangon, at the site that later became known as Bahadur Shah Zafar Dargah. His wife Zeenat Mahal died in 1886.

Below is the picture of colonial india. 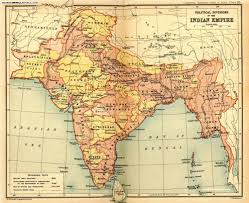