Please explain structure and functions of the pineal gland with diagram.

You can refer to answers given by your friends. They have answered well. However, I am providing you a simplified answer.

The pineal gland (also called the pineal body, epiphysis cerebri, epiphysis, conarium or the "third eye") is a small endocrine gland in the vertebrate brain. It produces the serotonin derivative melatonin, a hormone that affects the modulation of wake/sleep patterns and seasonal functions. Its shape resembles a tiny pine cone (hence its name), and it is located near the centre of the brain, between the two hemispheres, tucked in a groove where the two rounded thalamic bodies join.

FUNCTIONS: The pineal gland is involved in several functions of the body including: 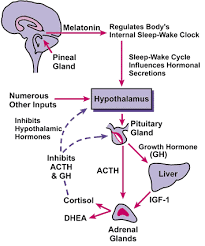