pls can u explain me budget set  with the help of n easy example or a diagram pls explain me this concept in an easy manner??????

Budget Set implies all the combinations of any two goods that a consumer can buy with a given amount of money. Two important points, in this context are as follows:

Budget Set implies aggregate of both these above two cases. That is, when a consumer spends all his money and when he spends lesser money (than what he has). In the figure below, the triangle AOB represents Budget Set. The line AB is regarded as Budget Line. 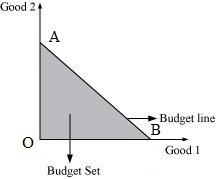 . The inequality sign of less than equal to M implies that the consumer can spend all his money (= M) and can even spend some amount of money (< M) on the goods.

The Budget Line is the outmost line (or frontier) of the Budget Set implying that the consumer is spending all his money on the goods.

Hope this explanation will help you in grasping the concept of Budget Set and Budget Line. Now, you can go through the lesson- 2 of Chapter- 2 of microeconomics of our study material, where, this concept is explained with the help of example and video.