From Wikipedia, the free encyclopedia
Jump to: navigation, search

In metallurgy, the Ellingham diagram is used to predict the equilibrium temperature between a metal, its oxide and oxygen, and by extension, reactions of a metal with sulphur, nitrogen and other non-metals. The diagrams are useful in attempting to predict the conditions under which a metal ore will be reduced to the metal.

Ellingham diagrams follow from the Second Law of Thermodynamics [ΔG = ΔH - TΔS] and are a particular graphical form of it. ΔG is the Gibbs Free Energy Change,ΔH is the Enthalpy Change and ΔS is the Entropy Change]

The Ellingham diagram plots the Gibbs free energy change (ΔG) for the oxidation reaction versus the temperature. In the temperature ranges commonly used, the metal and the oxide are in a condensed state (liquid or solid) with the oxygen gaseous, the reactions may be exothermic or endothermic, but the ΔG of the oxidation always becomes more negative with lower temperature, and thus the reaction becomes more probable statistically. At a sufficiently high temperature, the sign of ΔG may invert (becoming negative) and the oxide can spontaneously reduce to the metal.

As with any chemical reaction prediction based on purely energetic grounds the reaction may or may not take place spontaneously on kinetic grounds if one or more stages in the reaction pathway have very high Activation Energies EA.

If two metals are present, two equilibriums have to be considered, so that the metal with the more negative ΔG reduces, the other oxidizes.

In industrial processes, the reduction of metal oxides is obtained using carbon, which is available cheaply in reduced form (as coal, which can be rendered to coke). Moreover, when carbon reacts with oxygen it forms gaseous oxides carbon monoxide and carbon dioxide, therefore the dynamics of its oxidation is different from that for metals: its oxidation has a more negative ΔG with higher temperatures. Carbon can thus act as reductive agent both in element phase and in monoxide phase. Using this property, reduction of metals may be performed as a double redox reaction at relatively low temperature.

[edit] Use of Ellingham Diagrams

The main application of Ellingham diagrams is indeed in the metallurgy industry, where it helps to select the best reducing agent for various ores in the extraction process.

During smelting of haematite ore in the blast furnace reduction takes place at the top of the furnace, where temperature is in the range of 600oC to 700oC. From Ellingham diagram we notice that in this range carbon monoxide acts as a reducing agent since the process 2 CO + O2 --> 2CO2 has a lower negative value of free energy change than the process 2C + O2 --> 2CO. Thus in the blast furnace haematite is reduced by CO even though carbon is mixed with it. Fe2O3 + 3CO --> 2Fe + 3CO2

At high temperature the Ellingham curve for the reaction 2C(s) + O2(g) --> 2CO(g) slopes down and falls below the curves for all the metals. Hence, carbon can normally act as a reducing agent for all metal oxides at very high temperatures. But chromium formed at these temperatures react with carbon to form its carbide which gives undesirable properties to chromium metal obtained. Hence, for high temperature reduction of chromic oxide, carbon cannot be used.

The Ellingham curve for Aluminum always lies below the curves of metals like Cr, Fe, etc. So Aluminum can be used as the reducing agent for oxides of all these metals. This fact can be illustrated as below:

The free energies of formation of chromium oxide and aluminum oxide per mole of oxygen consumed are -540kJ and -827kJ respectively. The processes are:

So Aluminum oxide is more stable than chromium oxide.

Since Gibb's free energy is negative, aluminium acts as the reducing agent.

In pyrometallurgy, Al is used as a reducing agent in alumino-thermic process to extract Cr and Mn by reduction of their oxides.

Hope this will help you.. Basically, tge graph follows the simple principle that a metal oxide can be reduced by any other metal/non metal oxide which has a line in the graph below it.
For eg, in the given graph, Mg can reduce Al upto the point "A" , above which Al can reduce Mg.
Accordingly, the reducing agents are chosen to make the ?G sufficiently negative so that the reaction is spontaneous.
Hope the answer helped. The graphical representation of gibbs energy change vs absolute temprature for a process is known as ellingham diagram. Generallythe diagram consist of plots of changr in gnot vs T forthe formation of oxide of elements.

Ellingham diagrams are a particular graphical form of the principle that the thermodynamicfeasibility of a reaction depends on the sign of ΔG, the Gibbs free energy change, which is equal to ΔH − TΔS, where ΔH is the enthalpy change and ΔS is the entropy change .

The Ellingham diagram plots the Gibbs free energy change (ΔG) for each oxidation reaction as a function of temperature. For comparison of different reactions, all values of ΔG refer to the reaction of the same quantity of oxygen, chosen as one mole O (​1⁄2 mol O
2) by some authors[2] and one mole O
2 by others.[3] The diagram shown refers to 1 mole O
2, so that for example the line for the oxidation of chromium shows ΔG for the reaction ​4⁄3 Cr(s) + O
2(g) → ​2⁄3 Cr
2O
3(s), which is ​2⁄3 of the molar Gibbs energy of formation ΔGf°(Cr
2O
3, s).

In the temperature ranges commonly used, the metal and the oxide are in a condensed state (solid or liquid), and oxygen is a gas with a much larger molar entropy. For the oxidation of each metal, the dominant contribution to the entropy change (ΔS) is the removal of ​1⁄2 mol O
2, so that ΔS is negative and roughly equal for all metals. The slope of the plots

is therefore positive for all metals, with ΔG always becoming more negative with lower temperature, and the lines for all the metal oxides are approximately parallel. Since these reactions are exothermic, they always become feasible at lower temperatures. At a sufficiently high temperature, the sign of ΔG may invert (becoming positive) and the oxide can spontaneously reduce to the metal, as shown for Ag and Cu.

For oxidation of carbon, the red line is for the formation of CO: C(s) + ​1⁄2 O
2(g) → CO(g) with an increase in the number of moles of gas, leading to a positive ΔS and a negative slope. The blue line for the formation of CO2 is approximately horizontal, since the reaction C(s) + O
2(g) → CO2(g) leaves the number of moles of gas unchanged so that ΔS is small.

As with any chemical reaction prediction based on purely thermodynamic grounds, a spontaneous reaction may be very slow if one or more stages in the reaction pathway have very high activation energies EA.

If two metals are present, two equilibria have to be considered. The oxide with the more negative ΔG will be formed and the other oxide will be reduced.

This will help u to understand 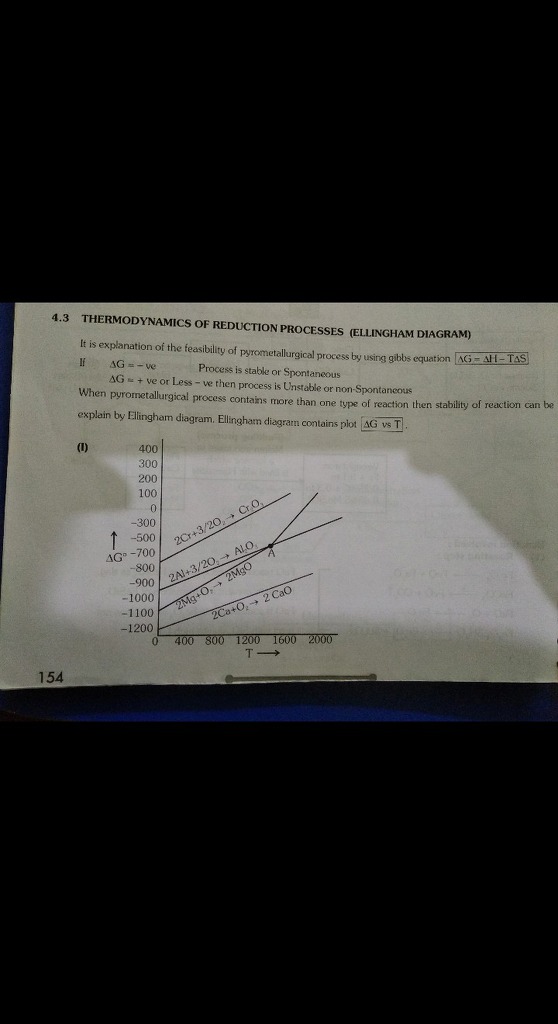 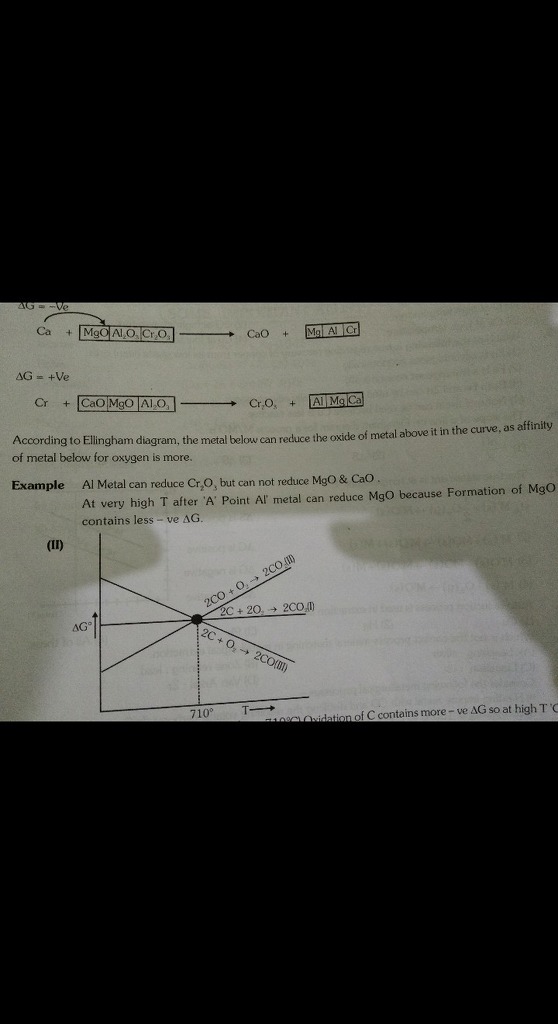 According to elingham diagram see if the condition for use of particular reagent . Depending upon stability of the agent say instance as of CO2 CO and C . Check about metal used . Check the reaction fesiability . E.g C is best reducing agent above 373K. I M Heartless answered this

describe the principle and experimental producer involved in column chromatography

HELLO PEOPLES HOW WAN TO SPEAK TO ME
What are you looking for?