Neha U. answered this

It is available in your study material. Kindly refer to the link provided below:
http://www.meritnation.com/cbse/class9/studymaterial/science/science/1_9_2_8
View Full Answer

these notes are from meritnation!

Question 1. What are the advantages of classifying organisms?
Answer : There are many advantages of classifying organisms which are given as below
1. Classifying organisms helps us in recognising the basic arrangement of a hierarchical structure among diverse species.
2. It tells us about the resemblances and relationships between various organisms thus facilitating studies or research of wide variety associated with organisms effortlessly.
3. It helps in understanding the evolution of organisms, as it gives us most of the information permitting a reconstruction of phylogeny of life.
4. It has major role in  agriculture, public health and environmental biology. Exact identification of harmful pests, disease vectors  makes possible to control diseases much easier.
5. Several ornamental plants have been introduced by horticulturists due to proper identification and nomenclature.
6. It also gives us a fair idea about the vast number of life forms and we are able to understand diversity among living organisms in a much better way.
7. It helps in placement of different organisms in a definite taxonomic group which is the basic requirement of biological sciences.
8. It forms the basis for Taxonomy in biological sciences, which is a science of identifying, grouping, and naming organisms according to their established natural relationship.
9. Classification of organism has facilitated  science of  genetic engineering to a great extent
Question 2. How would you choose between two characteristics to be used for developing a hierarchy in classification?
Answer : For developing a hierarchy of classification, we choose the fundamental characteristic among several other characteristics. These fundamental characteristics are independent of any other characteristics in their effects on the form and function of the organism. The characteristics in the next level would be dependent on the previous one and would decide the variety in the next level. In this way, we can build up a whole hierarchy of mutually related characteristics to be used for classification. For example, plants differ from animals in many ways such as body design, photosynthesis, the absence of locomotion, chloroplasts, cell wall, etc. But, out of these, only locomotion is considered as the basic or fundamental feature that is used to distinguish between plants and animals. This is because the absence of locomotion in plants gave rise to many structural changes such as the presence of a cell wall for protection, and the presence of chloroplast for photosynthesis (as they cannot move around in search of food like animals). Thus, all these features are a result of locomotion. Therefore, locomotion is considered to be a fundamental characteristic. By choosing the basic or fundamental characteristic, we can make broad divisions in living organisms as the next level of characteristic is dependent on these. This goes on to form a hierarchy of characteristics.
Question 3. Explain the basis for grouping organisms into five kingdoms.
Answer : Robert .H. Whittaker in 1959 proposed a five kingdom classification of living organisms on the basis of Linnaeus’ system of classification encorporating cell structure, mode and source of nutrition and body organisation as main features. The five kingdoms proposed by Whittaker are Monera, Protista, Fungi, Plantae, and Animalia 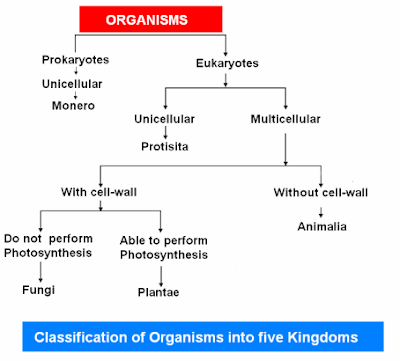 The basis for grouping organisms into five kingdoms is as follows :
(i) On the basis of the presence or absence of membrane-bound organelles, all living organisms  are divided into two broad categories of eukaryotes and prokaryotes. This division lead to the formation of kingdom Monera, which includes all prokaryotes.
(ii) Then, eukaryotes are divided as unicellular and multicellular, on the basis of cellularity. Unicellular eukaryotes form kingdom Protista, and multicellular eukaryotes form kingdom Fungi, Plantae, and Animalia.
(iii) Animals are then separated on the basis of the absence of a cell wall.
(iv) Since fungi and plants both contain a cell wall, they are separated into different kingdoms on the basis of their modes of nutrition. Fungi have saprophytic mode of nutrition, whereas plants have autotrophic mode of nutrition. This results in the formation of the five kingdoms
Question 4. What are the major divisions in the Plantae? What is the basis for these divisions?
Answer : The kingdom Plantae is divided into five main divisions: Thallophyta, Bryophyta, Pteridophyta, Gymnosperms, and Angiosperms.
The classification depends on the following criteria:
• Differentiated or Undifferentiated plant body
• Presence /absence of vascular tissues
• With/without seeds
• Naked seeds/ seeds inside fruits
(i) The first level of classification depends on whether a plant body is well differentiated or not. A group of plants that do not have a well differentiated plant body are known as Thallophyta.
(ii) Plants that have well differentiated body parts are further divided on the basis of the presence or absence of vascular tissues. Plants without specialised vascular tissues are included in division Bryophyta, whereas plants with vascular tissues are known as Tracheophyta.
(iii) Tracheophyta is again sub-divided into two divisions Pteridophyta and Phanerogams on the basis of the absence/presence of seed formation.
(iv) Pteridophyta plants do not produce seeds
(iv) Phanerogams plants have well developed reproductive organs that finally produce seeds.
(v) Phanerogams group is further sub- divided on the basis of whether the seeds are naked or enclosed in fruits. This classifies them into gymnosperms and angiosperms.
Gymnosperms are seed bearing, non-flowering plants, whereas angiosperms are flowering plants in which the seeds are enclosed inside the fruit.
Question 5. How are the criteria for deciding divisions in plants different from the criteria for deciding the subgroups among animals?
Answer :Criteria for deciding divisions in plants are:
(i) Differentiated/ Undifferentiated plant body
(ii) Presence/ absence of vascular tissues
(iii) With/without seeds
(iv) Naked seeds/ seeds inside fruits
Criteria for deciding subgroups among animals are:
Kingdom Animalia is divided into two major groups on the basis of the presence or absence of a notochord.
Non-chordates do not possess a notochord, while all members of the phylum chordates possess a notochord.
Non-chordate is further divided into subgroups on the basis of the following features:
On the basis of the above features, non-chordates are divided into the following subgroups:
Porifera, Coelenterate, Platyhelminthes, Nematodes, Annelids, Molluscs, Arthropoda, and Echinodermata
All members of the phylum chordate possess a notochord. However, some animals such as Balanoglossus, Amphioxus, Herdmania, etc. have a notochord, which is either absent or does not run the entire length of the animal’s body. Therefore, these animals are kept in a separate sub-phylum called Protochordata, and the rest of the chordates are included in the sub-phylum vertebrata. The members of the sub-phylum vertebrata are advanced chordates. They are divided into five classes: Pisces, Amphibian, Reptilia, Aves, and Mammalia
Question 6. Explain how animals in Vertebrata are classified into further Subgroups ?
Answer : Vertebrata : These animals have a true vertebral column and internal skeleton, allowing a completely different distribution of muscle attachment points to be used for movement. Vertebrates are bilaterally symmetrical, triploblastic, coelomic and segmented, with complex differentiation of body tissues and organs. All chordates possess the following features:
(i) They have a notochord
(ii) They have a dorsal nerve cord
(iii) They are triploblastic
(iv) They have paired gill pouches
(v) They are coelomate.
Vertebrates are grouped into five classes

the notes are just amazing and it helped me a lot..

The Mykey Siddharth answered this

Diversity: It refers to the variety and variability among living organisms from all sources

@ cheweety rose plssend it to me i am not able to copy it.
What are you looking for?