structure and function of heart?????//

You may refer to our study material at the following link and if you have any doubts then get back to us.

Flow of blood in the human heart 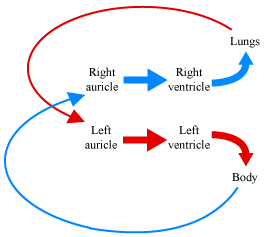 The important functions of heart are :

2.Transport of food to cells

3.Transport of oxygen to cells

4.Transport of carbon dioxide to lungs.