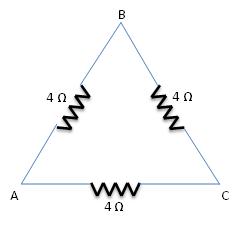 Suppose we need to find the equivalent resistance between A and C.

This 8 Ω and AC are in parallel.

The resistances are connected in the form of an equilateral triangle. So, it is understood that the two resistors are in series and the third resistors with both its end connected to the other two resistors is in parallel to the two.

Thus, the effective resistance in the two corners of the triangle can be calculated using 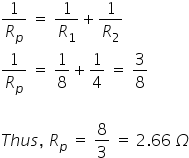 Thus, the effective resistance between the two corners is 2.66 Ω