what are antaganostic  pair of muscles?

@Aman: Kindly refer to the answer given by your friends.

@Others: Good answer!! Your answers are really helpful to all the users of this community. Keep writing!

Most muscles work in pairs, and when a muscle works it needs to have an agonist and an antagonist, unless the muscle's natural state is opposite to that which is produced by the muscle, exampleSphincter ani externus muscle.

An "antagonist" is a classification used to describe a muscle that acts in opposition to the specific movement generated by the agonist and is responsible for returning a limb to its initial position.

Antagonistic pairs are needed in the body because muscles can only exert a pulling force, and can't push themselves back into their original positions. An example of this kind of muscle pairing is thebiceps brachii and triceps brachii.

When the biceps are contracting, the triceps are relaxed, and stretches back to its original position. The opposite happens when the triceps contract.

Agonist is a classification used to describe a muscle that causes specific movement or possibly several movements to occur through the process of its own contraction. This is typically a term designated for skeletal muscles. Agonists are also referred to, interchangeably, as "prime movers" since they are the muscles being considered that are primarily responsible for generating a specific movement.

For an agonist to be effective as a mover in the skeletal system it must actually cross one or more structure(s) that can move. This is typically where the muscle crosses a joint by way of a connecting tendon. As the myofibrils of a muscle are excited into action and then contract, they will create tension and pull through the tendon and pulling the lever arm of bone on the opposite side of the joint closer to the muscles origin. 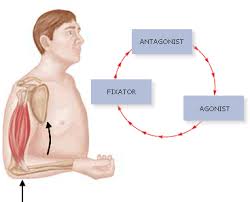 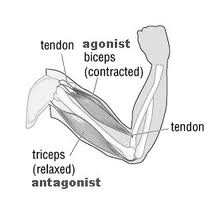 Hope this helps you out.