what are the uses of nitrogen

(ii) Nitrogen mixed with argon is used in electric bulbs to provide an inert atmosphere. It helps in prevention of oxidation and evaporation of the filament of the bulb, giving it a longer life.

(iii) It is used to produce a blanketing atmosphere during processing of food stuff, to avoid oxidation of the food. It is also used when food is being canned, so that microorganisms do not grow.

(iv) It is used in metal working operations to control furnace atmosphere and in metallurgy to prevent oxidation of red-hot metals.

(v) Nitrogen in the air helps as a diluting agent and makes combustion and respiration less rapid.

(vi) It is used by the chemical, petroleum, and paint industries to provide inactive atmosphere to prevent fires or explosions.

(vii) It is used in the industrial preparation of ammonia, which is converted into ammonium salts, nitric acid, urea, calcium cyanamide fertilizers etc.

(viii) Liquid nitrogen is used as a refrigerant for food, for storage of blood, cornea etc. in hospitals. Meat, fish etc., can be frozen in seconds by a blast of liquid nitrogen, which can provide temperatures below -196oC.

(ix) Liquid nitrogen is used in scientific research especially in the field of superconductors. 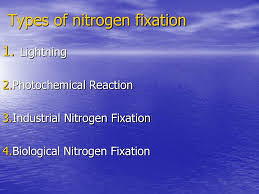 see in pictures types of nitrogen.

It helps plant to make proteins

Nitrogen helps in burning of gas .If nitrogen is not there gas will not burn .
What are you looking for?