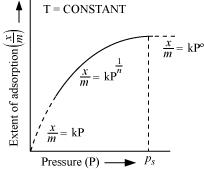 The plot between the extent of adsorption

against the pressure of gas (P) at constant temperature (T) is called the adsorption isotherm.

Freundlich adsorption isotherm gives an empirical relationship between the quantity of gas adsorbed by the unit mass of solid adsorbent and pressure at a specific temperature.

From the given plot it is clear that at pressure PS,

Case I- At low pressure:

The plot is straight and sloping, indicating that the pressure in directly proportional to

When pressure exceeds the saturated pressure,

depends on P raised to the powers between 0 and 1. This relationship is known as the Freundlich adsorption isotherm.

and log P, a straight line is obtained with the slope equal to 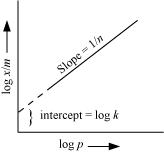