what is blind spot explain?????

A blind spot or scotoma, is an obscuration of the visual field.  It is the point of entry of the optic nerve on the retina, insensitive to light. An area where a person's view is obstructed. 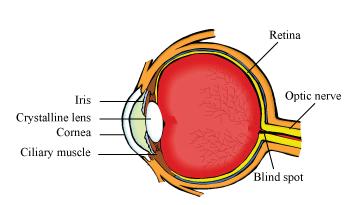 The point where the retina and the optical nerve meet each other is devoid of any sensory cells. Hence, vision is not possible from this point. This point is known as the blind spot.

Blind spot is the point of entry of the optic nerve on the retina, which is insensitive to light. It is an area where a person's view is obstructed.The blind spot has no rods or cones, so no light or visual image can be transmitted.

A blind spot, scotoma, is an obscuration of the visual field. A particular blind spot known as the blindspot, or physiological blind spot, or "blind point", or punctum caecum in medical literature, is the place in the visual field that corresponds to the lack of light-detecting photoreceptor cells on the optic disc of the retina where the optic nerve passes through it. Since there are no cells to detect light on the optic disc, a part of the field of vision is not perceived. The brain interpolates the blind spot based on surrounding detail and information from the other eye, so the blind spot is not normally perceived.

Although all vertebrates have this blind spot, cephalopod eyes, which are only superficially similar, do not. In them, the optic nerve approaches the receptors from behind, so it does not create a break in the retina.

The first documented observation of the phenomenon was in the 1660's by Edme Mariotte in France. At the time it was generally thought that the point at which the optic nerve entered the eye should actually be the most sensitive portion of the retina; however, Mariotte's discovery disproved this theory.