what is cyclotron and how it works?

The sub-atomic charged particles experience large forces when subjected to electric and magnetic fields due to their extremely small mass. In nuclear physics such energized particles are used to bombard nuclei causing nuclear reactions. This helps to obtain information about the nucleus.

A cyclotron is device by which positively charged particle can be accelerated and the desired nuclear reaction can be brought about.

A positively charged particle can be accelerated to high energy with the help of an oscillating electric field, by making it cross the same electric field time and again with the use of a strong magnetic field.

It consists of two dees or D-shaped metal chambers D1 and D2. The dees are separated by a small distance. The two dees are perpendicular to their plane. P is the position where the ion source is placed.

The dees are maintained to a potential difference whose polarity alternates with the same frequency as the circular motion of the particles. The dees are closed in a steel box placed between the poles of a strong electromagnet. The magnetic field is perpendicular to the plane of the dees.

The positive ion P to be accelerated is placed in between the two dees. If at any instant, D1 is at negative potential and D2 is at positive potential, then the ion gets accelerated towards D1 but since its perpendicular to B, it describes a circular path of radius r and Lorentz force provides the centripetal force.

Time taken to describe a semicircle is

If this time is equal to the time during which D1 and D2 change their polarity, the ion gets accelerated when it arrives in between the gaps. The electric field accelerates the ion further. Once the ion is inside the dee D2, it now describes a greater semicircle due to the magnetic field. This process repels and the ion goes on describing a circular path of greater radius and finally acquires a high energy. The ion is further removed from a window W. The maximum energy acquired by the ion source is

The frequency of cyclotron is given by

If you are satisfied do give thumbs up.

Cyclotron is a device to accelerate charged particles to very high speed. It employs an electric and magnetic field for the same purpose.

Working: Consider the given diagram. 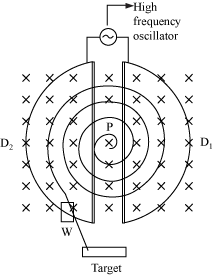 Pair of hollow metallic cylinders, shaped like D (called Dees) is placed in an evacuated chamber. D1 and D2 are placed such that they are slightly separated along a diameter.  Also, D1and D2 are connected to a high frequency oscillator, due to which they are positively and negatively charged at a given time. A magnetic field, B, is applied in a direction as shown in the figure.

Suppose, a positively charged particle, P, is placed at the center. At this time, D1 is negative and D2 is positive (suppose). The positively charged particle will be attracted to D1. But, after entering D1 it experiences no electric field (as there is no electric field inside metallic cylinder). Now, under influence of the magnetic field, B, the particle P follows a circular path. It emerges out of D1 after time t, but at this time, D2 becomes negative and D1 positive. Hence, particle P is accelerated to enter D2, and follows a circular path again. After following a similar path, it gains a very high speed in the end when it comes out to strike the target.