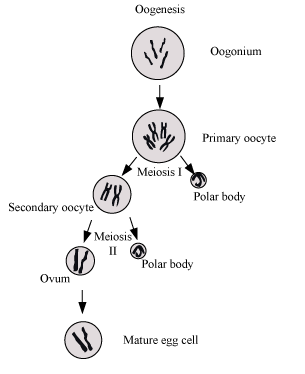 It starts during embryonic growth and millions of gamete mother cells (oogonia) are formed in the foetal ovary.

These cells undergo meiosis, but get temporarily arrested at the prophase and are called primary oocytes.

Before reaching puberty, a large number of primary oocytes degenerate and the remaining ones get surrounded by layers of granulosa cells and new theca and are called secondary follicles.

This tertiary follicle further changes into the Graafian follicle. The secondary oocyte is surrounded by the zone pellucida.

Then the Graafian follicle ruptures to release the ovum by ovulation.

I hope you understood.