What is sublimation? Explain with help of an activity and a diagram.

Sublimation:
It is a process in which solid which on heating vaporize without melting. And, on cooling, the vapours change directly back into the solids without going through liquid state. Such a change in the state of a solid is called sublimation.
The solid obtained as a result of sublimation is called the sublimate.
Activity to show sublimation-
Take some ammonium chloride in a porcelain dish and cover it with an inverted conical funnel.
Insert some cotton at the opening of the funnel.
The basin is now heated on a sand bath.
Ammonium chloride sublimes off as vapours and gets deposited on the cooler parts of the funnel. 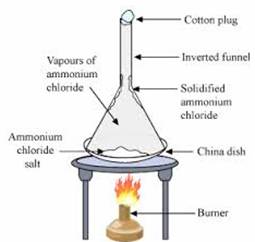