what is the difference between multiple cropping and intercropping?

Mixed cropping or multiple croping is the technique wherein two or more crops are sown simultaneously on the same land, without any definite pattern. This system minimizes the risk of crop failure. Crop combinations grown in this manner include wheat and gram, wheat and mustard, and groundnut and sunflower.

Intercropping is the process wherein two or more crops are grown simultaneously in the same field in a definite pattern. In this process, a few rows of one crop alternate with a few rows of another crop. Crop combinations grown in this way include cauliflower and spinach, soya bean and maize, and bajra and lobia. 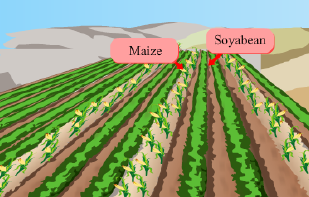 The crops grown together are such that their nutrient requirements are different. This ensures that the crops do not compete for the same nutrients, which in turn allows maximum utilization of the applied nutrients by each individual crop.

Intercropping helps prevent the spread of pests and diseases throughout the field. It also reduces soil erosion.

To get at least one crop under favorable conditions

More emphasis is given to the main crop

All crops are cared equally

There is no competition between both crops

There is competition between all crops growing

The crops are almost of the same duration

Sowing time may be same or different

It is same for all crops