what is unification and reduction in physics?

Unification is the attempt to describe all physical forces as a single (unified) set of mathematical relationships. There are 5 forces that cause all observed phenomenon: gravitational force, magnetic force, electric force, weak force, strong force.

In the 1860's James Clerk Maxwell showed that magnetism and electricity are described by a single set of equations, and that they are fundamentally the same thing - now known as electromagnetism.

In the 1970's Abdus Salam, Sheldon Glashow and Steven Weinberg did the same thing with the weak nuclear force and electromagnetism . They developed a mathematical model that showed that under the right conditions (high temperatures/energies) the two phenomenon would be the same thing.

Physicists are now working on a "Grand Unified Theory" (GUT) that would also include the strong nuclear force. A more distant goal is the inclusion of gravity to create a truly unified "theory of everything".

Reductionism is a philosophical position which holds that a complex system is nothing but the sum of its parts, and that an account of it can be reduced to accounts of individual constituents.[1] This can be said of objects, phenomena, explanation, theories, and meanings.[2]

A relared effort is to derive the properties of a bigger,more complex,system from the properties and interactions of its constituent simpler parts.this approach is called reductionism.

Unification is the making of relations between different aspects or subjects of physical world or nature in Physics. For example when scientist discovered the formula for gravitation the unified velocity mass force and different aspects reduction is the process like we do in math for example when we make a formula for kinetic energy it is actually as same as work done that is force into displacement but scientist turned it into another formula that is half mass into velocity square reduction is the process of reducing an equation of formula in 2 hour convenience I hope it is helpful 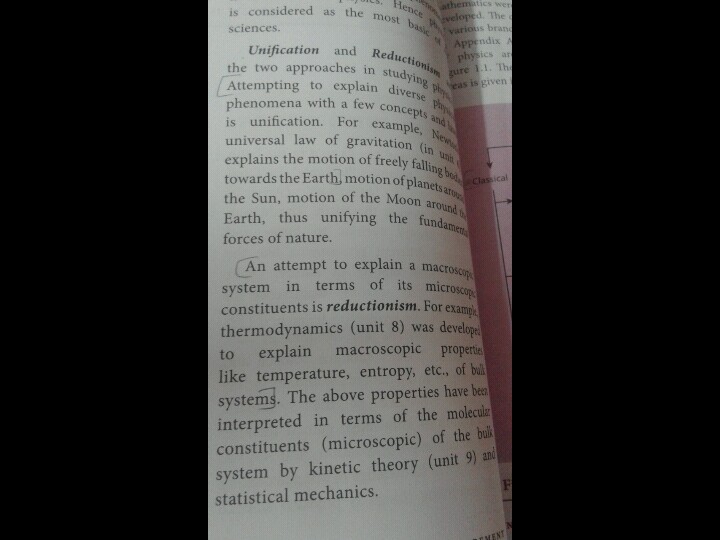 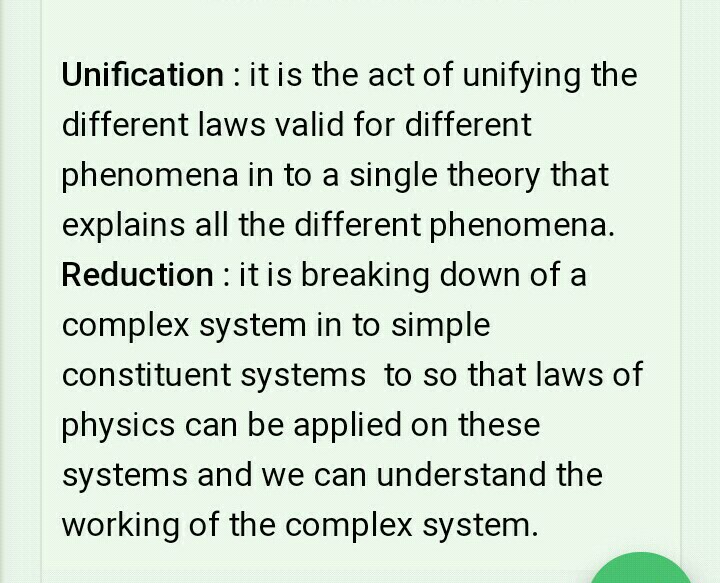 Unification: It is a trial to correlate and unite various universal laws and basic phenomena of nature to explain an activity. For example?Maxwell unified electric, magnetic and optical phenomenon on when he explained that light is an electromagnetic wave.

Unification means to explain diverse phenomena by some basic concepts and laws. 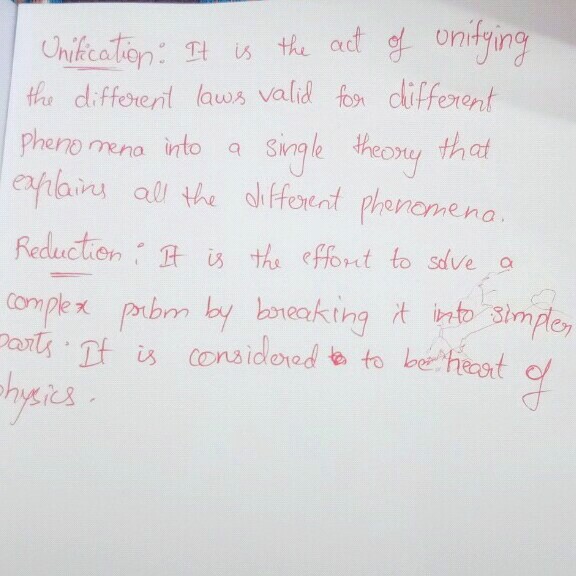 To explain diverse physical phenomena in term of a few concept and laws .... Eg gravitational force

Unification is attempt to unify fundamental forces of nature with use of minimum no. of laws.

UNIFICATION:Refers to the attempts made to explain diverse physical phenomena in terms of few concepts and laws.

Unification approach consider all of the world's phenomena as a collection of universal laws in different domains and conditions.
Reduction approach is to derive properties of complex systems from the properties and interaction of its constituent parts.

Do you have computer science book's pdf

Unification is a part of physics which includes study of many equations and laws in a simple and unified law.
Reduction is a branch of physics under which the study of complex mechanics by studying their smaller and simpler parts..