What kind of bonds are present in Cellulose ?

Cellulose A straight-chain, insoluble polysaccharide that is composed of glucose molecules linked by beta-1,4 glycosidic bonds. It is the principal structural material of plants, and as such is the most abundant organic compound in the world. I hope it helps...
View Full Answer

cellulose is a long chain of glucose units attached together by b(1,4) linkages. It is the ability of these chains to hydrogen-bond together into fibres (microfibrils) that gives cellulose its unique properties of mechanical strength and chemical stability.

GLYCOSIDIC BONDS ARE FOUND IN CELLULOSE

Cellulose is the substance that makes up most of a plant's cell walls. Since it is made by all plants, it is probably the most abundant organic compound on Earth. Aside from being the primary building material for plants, cellulose has many others uses. According to how it is treated, cellulose can be used to make paper, film, explosives, and plastics, in addition to having many other industrial uses. The paper in this book contains cellulose, as do some of the clothes you are wearing. For humans, cellulose is also a major source of needed fiber in our diet.

The structure of cellulose

Cellulose is usually described by chemists and biologists as a complex carbohydrate (pronounced car-bow-HI-drayt). Carbohydrates are organic compounds made up of carbon, hydrogen, and oxygen that function as sources of energy for living things. Plants are able to make their own carbohydrates that they use for energy and to build their cell walls. According to how many atoms they have, there are several different types of carbohydrates, but the simplest and most common in a plant is glucose. Plants make glucose (formed by photosynthesis) to use for energy or to store as starch for later use. A plant uses glucose to make cellulose when it links many simple units of glucose together to form long chains. These long chains are called polysaccharides (meaning "many sugars" 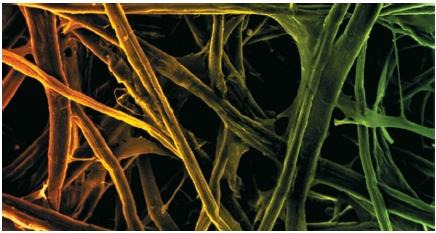 and pronounced pahl-lee-SAK-uh-rydes), and they form very long molecules that plants use to build their walls.

It is because of these long molecules that cellulose is insoluble or does not dissolve easily in water. These long molecules also are formed into a criss-cross mesh that gives strength and shape to the cell wall. Thus while some of the food that a plant makes when it converts light energy into chemical energy (photosynthesis) is used as fuel and some is stored, the rest is turned into cellulose that serves as the main building material for a plant. Cellulose is ideal as a structural material since its fibers give strength and toughness to a plant's leaves, roots, and stems.

Since cellulose is the main building material out of which plants are made, and plants are the primary or first link in what is known as the food chain (which describes the feeding relationships of all living things), cellulose is a very important substance. It was first isolated in 1834 by the French chemist Anselme Payen (1795–1871), who earlier had isolated the first enzyme. While studying different types of wood, Payen obtained a substance that he knew was not starch (glucose or sugar in its stored form), but which still could be broken down into its basic units of glucose just as starch can. He named this new substance "cellulose" because he had obtained it from the cell walls of plants.