which are the structural units of compound eye.

2. All retinula cells run the entire length from the cone to the basal lamina, although two, called the proximal cells, only contribute to the lowest third of the rhabdom, and one of either cell 6 or cell 7 on our arbitrary numbering system forms its axon one third the way up the ommatidium.

4. The position of these threads correlates with the number of the cell distally displaced from the rhabdom. We suggest that cone thread position in the developing ommatidium determines some features of retinula cells and we propose a simple model to account for this.

Figure 1: Schematic structure of the insect compound eye. The size and detailed structure of the different neuronal ganglia and centers may vary from species to species. The structure shown is closest to dipteran flies, although the number of retinotopic elements (facets and corresponding parts in deeper structures) is normally much larger. Compound eyes are organs of vision in arthropods (insects and crustaceans). A compound eye is characterized by a variable number (a few to thousands) of small eyes, ommatidia, which function as independent photoreception units with an optical system (cornea, lens and some accessory structures) and normally eight photoreceptor cells. The compound eyes do not form an image like the large lens eyes of vertebrates and octopi, but a "neural picture" is formed by the photoreceptors in ommatidia, which are oriented to receive light from different directions, defined by the optics of the ommatidia, the curvature of the eye and the spacing arrangement and density of the ommatidia (Fig. 1). The optical system shows numerous variations, depending how isolated the ommatidia are from each other and how light is focused onto the photoreceptors. Main variants are the apposition eye, where the ommatidia are optically isolated (e.g. in locusts and beetles; typically in day-active insects), the superposition eye, where theommatidia are not optically isolated (e.g. in butterflies; typically in crepuscular or night-active insects), and the neural superposition eye, with the ommatidia optically isolated but neuronal arrangement causes partial summation of pixels (found in diurnal flies)(reviews: Land, 1981; Stavenga 2006).

Light stimulation creates depolarizing graded potentials in insect photoreceptors (as opposed to hyperpolarizing in vertebrate rods and cones). Action potentials do not exist, generally, although they may have a role in photoreceptors of some species (e.g. in the cockroach, Heimonen et al. 2006). The signals are processed in the first synaptic layer, the lamina, and in the further neural centers (e.g. the medulla) in a retinotopic fashion. This means that the "pixels" created by the anatomical organization of the retina are being preserved. The signals and their information content change continuously, however. In deeper visual centers the retinotopic organization is disrupted to the benefit of higher level analysis, like motion detection, pattern recognition and visual orientation (Strausfeld 1976).

The molecular basis of insect phototransduction is best known in Drosophila melanogaster (Hardie and Raghu 2001). Absorption of light quanta by rhodopsin molecules leads to activation of a G-protein-coupled phosphoinositide pathway. This takes place in the microvillar part of the photoreceptor in a very small compartment, where all participating molecules are very close to each other. The molecular mechanism involves activation of two types of cationic ion channels in the microvillus, creating a light-induced current (LIC) that is measurable with voltage-clamp methods, like the patch-clamp. Opening of the channels (products of trp and trpl genes) creates a Ca2+ and Na+ conductance, depolarizing the photoreceptor. Insect photoreceptors, like their vertebrate counterparts, the rods and cones, are able to respond with so-called quantum bumps to single photons, but with fast kinetics. Fusing of voltage responses to single quanta creates the (graded) receptor potential, which is passively conducted along the axon in most cases.

Figure 3: Transduction current and filtering by the non-transductive membrane. a) diagram of the main ionic currents involved (ion pumps and exchangers have been omitted). Light stimulation induces a cationic current from the microvillus to the rest of the cell, part of the return currents going through Kv-channels, b) illustration of the idea of the membrane filter, formed by a combination of passive membrane (with its normal RC-structure) and the Kv-channels.

The small eye optics of photoreceptors creates a situation, where a point-like object moving across the receptive field of a photoreceptor produces a near-Gaussian intensity distribution in function of the angle of incidence (Stavenga, 2006). The whole of the compound eye works in this fashion, meaning that the the initial part of the eye performs a spatial low-pass filtering operation to the visual image, in addition to the sampling dictated by the density of optical elements. In the same time, the photoreceptor signals are necessarily limited by both slowness of transduction itself but also by the membrane time constant, to produce a temporal low-pass filtering (Fig. 3.; van Hateren 1992). The photoreceptor (non-transductive) membrane is especially slow, because the microvillar membrane increases the membrane area nearly 5-6 fold, not creating a conductive pathway to the same extent. Both filtering operations may be regulated. The receptive field may be narrowed or widened somewhat by subtle changes in the optics. On the other hand, the photoreceptor membrane has voltage-dependent (Kv-type) K+channels that lower membrane resistance with depolarization (Weckström and Laughlin, 1995). This means that when stimulated, the photoreceptors become faster with sharper receptive fields.

Synaptic transmission to 2nd order cells Synaptic transmission to LMCs in flies Visual information in the form of neural voltage signals are further processed in the first neuropil, the lamina, where the 2nd order neurons, the large monopolar cells (or LMCs) form the post-synaptic elements. These are often, most conspicuously in Dipteran flies, grouped in retinotopic neural cartridges, lined by glial cells. The 2nd order cells receive signals from the photoreceptors in the form of histamine transmitter that opens fast Cl- channels in the LMCs (Hardie, 1989), thus creating hyperpolarizing responses to depolarizing photoreceptor input. 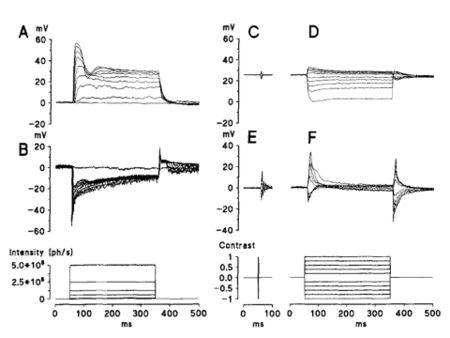 Figure 4: Responses of fly photoreceptors to light pulses when dark-adapted (A) and to contrast pulses when light-adapted (C and D); responses of the first-order interneurons, the LMCs show inverted responses to the same (B, E and F). Modified from Juusola et al. 1995.  . The Cl- equilibrium potential is very negative in LMCs, meaning that depolarizations in photoreceptors are turned into hyperpolarizations in LMCs, i.e. the signals change sign. 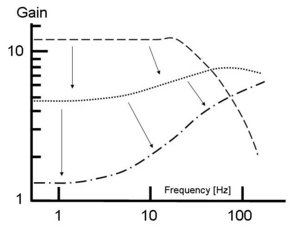 In addition to sign change the signals in LMCs are further changed by a process akin to differentiation (or temporal antagonism) (Laughlin, 1987). Thereby the average intensity of illumination changes the character of synaptic transmission: in dim light the synapse has temporal characteristics like those of the photoreceptors, in bright light the synapse changes into a high-pass filter (Fig. 3.). This adaptation of temporal characteristics enhances temporal contrasts and apparently is needed for further processing.

Also spatial processing takes place right in the periphery of the compound eye, in the lamina. There a process called lateral inhibition creates spatial anagonism (similarly as in the vertebrate retina; Laughlin, 1987). The cellular basis of lateral inhibition may be a combination of direct synaptic feedbacks from the lamina to the photoreceptors, but also in the poorly investigated extracellular potentials combined with the regulation of the glial permeability or currents. The lateral inhibition is able to attenuate signals at any pixel (one ommatidium) that are probable, i.e. possible to predict on the basis of the neighbouring pixels. The spatial information processing may thus fullfil the requirements of predictive coding (Srinivasan et al.,1982)

The photoreceptors at least in fly compound eye receive feedback from the second-order cells through a network in the lamina (Zheng et al, 2006). Viewed more broadly, this is part of what can be called network adaptation, whereby the neural elements downstream from photoreceptors change their function according to the input properties. This improves temporal performance of the visual system. However, it is not known, how wide-spread these mechanisms are in other animals apart from flies.

Very little experimental data is available on signal processing in the medulla, and mostly our knowledge comes from inferences based on anatomical investigation of the synaptic connections and local microcircuits. The retinotopic organization of the signals is likely to be retained, but the signals of several outputs of the lamina neurons are segregated to different pathways, possibly performing functions such as colour discrimination, elementary motion detection (see below) and intensity coding.

Neurons responding predominantly to motion in the visual field ( Insect motion vision neurons) are found in the lobula or lobular plate ganglion. They are supposed to receive retinotopic input from hypothetical neural elements called EMDs (elementary movement detectors)residing most probably in the medulla and calculating motion from the pixel-based information with a mechanism called Reichardt correlation (Hassenstein and Reichardt, 1956). The cellular substrates of EMDs have not yet been found, but circumstancial evidence for the mechanisms and the existence of EMD-like elements is quite strong. The motion detection neurons come in various flavors, but roughly they can be divided into detectors of horizontal or vertical motion (Hausen, 1981). The outputs of the cells are used in guidance of movements, either terrestrial or flying (like the so-called optomotor responses). Some cells may also be involved in detection of detailed objects.

Some insects, notably locusts, have been shown to have a special system, with which they can avoid collisions, and generally, detect objects approaching them in their visual field (e.g. Rind and Simmons, 1992). In locusts a lobula neuron called LGMD (lobula giant movement detector) has been described, which, through some relays, has output to movement controlling neural circuits. It does not react to the movement of the whole visual field, but vigorously to enlarging (looming) objects. This response is rapidly habituated away.