WHY IS EARTH KNOWN AS "UNIQUE PLANET" ?EXPLAIN

coz dis is d only planet where the climate supports the life  system.

earth is regarde as unique planet because this is the only planet where life ,biomes and different types of spheres are available

Earth is called an unique planet because it is the only planet which supports life, has oxygen, water, air !!!

Earth is called as a unique planet because it is the only planet known that supports life. It has the haveclimatic conditions favouring life.

Earth is called as unique planet bcoz the earth is only the planet where life is known to be exist.

1)Earth is the only planet known where intelligent life exist.
2)It lies in the circumstellar habitable zone (CHZ). CHZ is defined in the image given below.

3. Earth has a unique magnetic field which protects the earth from the harmful solar winds. These solar winds played a role in transforming venus into hell.

4. Earth has Van Allen radiation belts which protects it from cosmic rays.

5. Our large neighbour Jupiter protects is from many comets and asteroids that come from the keiper belt and Oort cloud.

6. Earth's atmosphere is favorable to support life on earth. This atmosphere consists of different gases in adequate amount. If the percentage of gases would differ then life on earth may face serious consequences.

7. Tectonic plates of earth differentiates it from most other planets.

8. Earth has a solid crust unlike the gaseous planets.

9. Earth has been gifted with a medium sized star which release solar winds and protect us from the harmful radiation of outer space.

1Because it is in the right distance from the sun.
2 due to right atmosphere.

(a) It is a habitable planet. It is the only planet in the solar system that supports life. All forms of life right from the minutest microscopic organ­ism to huge land and marine animals.

(b) Its distance from the sun (approximately 150 million kilometers) is appro­priate to give it an average temperature of 18 to 20 degrees Celsius. It is neither as hot as Mercury or Venus nor as cold as Jupiter or Pluto.

(d) It has the biosphere which provides us with food, shelter, clothing and minerals.

Because in life is exist

Earth is often referred to as a unique planet because it has all the facilities or conditions for life to exist. Earth is the only planet where water exists in all three forms.

Earth is only planet where life is known to exist. Earth is at a perfect distence from the sun and hence it has the right combination of gases,materialsand temperature to support life

because it is the only planet in which water is available

its the only planet where life exists

Earth is the only planet in our solar system that has a large amount of liquid water. About 74% of the surface of Earth is covered by liquid or frozen water. Because of this, people sometimes call it "blue planet". Because of its water, Earth is home to millions of species of plants and animals.

Cuz it has got life darn it!

Earth is known as a unique planet because this is the only planet in which life is known to exist.

Because it is the only planet on which life czn sustain

it is the only planet where life and biodiversity and oxygen, water  are available

Because earth has water which other planets do not and life is exsisting on earth . earth was medium temperture not to hot and not to cold

Because u live in it

Because it has life onit

Earth is the only planet in our solar system that has a large amount of liquid water. About 74% of the surface of Earth is covered by liquid or frozen water. Because of this, people sometimes call it "blue planet". Because of its water, Earth is home to millions of species of plants and animals

The Earth is known as a unique planet as life exists on it. This is because of the following reasons:

Earth is unique.Earth has many things going for it, that other planets just don’t have. For one, it has large amounts of liquid water. This might not be too special, as Jupiter’s moon Europa also may have liquid water, but it is not certain. Other than maybe Europa, Earth is the only planet that currently has liquid water . Also, Earth has a substantial amount of oxygen that allows it to support life, and it has the perfect amount for fires to burn. If there was too much oxygen, everyone would die of oxygen toxicity, and fires would burn.

Earth has a thick atmosphere, which grants protection to Earth’s residents from harmful UV rays from the sun. It also is the perfect density that it does not crush people, but it isn’t too thin so it allows people to breathe. Also, Earth has a powerful magnetic field that protects it from harmful solar wind and solar flares. The reason Mars is such a barren wasteland with a very thin atmosphere is because it does not have a very strong magnetic field; over time, the Sun blew away its atmosphere. The magnetic field on Earth deflects most solar wind and solar flares, but some wind can get through and interact with the particles in the atmosphere. This is what creates Aurora Borealis, or the Northern lights.

In conclusion, Earth is unique because against all odds it manages to be the perfect distance from a star, it is a good size, it has a thick atmosphere, a strong magnetic field, an oxygen rich atmosphere, and it has large amounts of liquid water. All these factors combined allow Earth to be the only planet that is able to support complex life.

Because it is the only plant which have our needs and everything.for example our resources.

It is the only planets which have life possible on it

it is known to be unique planet because it is the only planet known to sustain life and an atmosphere.

BECAUSE EARTH IS THE ONLY PLANET IN WHICH LIFE EXIST

Because only earth has life can exist. Only this planet has water exist

BECUSE IT THE ONLY PLANET WHERE LIFE EXISTS

First it was formed by a giant collision late in the accretion process, which formed the Earth-Moon system.

As a result of this, Earth has a long-lasting liquid core, plate tectonics which recycle rocks, water and CO2, a magnetic field which protects life from damaging radiation, and a large moon which keeps its axis stable, keeps recycling minerals, and reshaping land masses with tides and provides an intertidal zone where life can transition from sea to land.

Other moons in the Solar-System seem to be mainly smaller captured asteroids or planetoids or formed along with the planet during accretion.

Earth has oceans of open water, and is in the “Goldilocks zone” of the Solar System.

The Solar System is in the habitable zone of a particularly large galaxy and has a circular orbit which keeps it away from some of the intense radiation in the star forming spiral arms or near the centre. It is also formed from a “metal-rich” accretion disk with plenty of heavy elements. Metallicity - Wikipedia

Does Our Galaxy Have a Habitable Zone? - Universe Today

I’ve got to say, you are one of the luckiest people I’ve ever met.

Not only that, but your lineage happened to be born on a planet, which was in just the right location around just the right kind of star. Not too hot, not too cold, just the right temperature where liquid water, and whatever else was necessary for life to get going. Again, I like your lucky streak.

In fact, you happened to be born into a Universe that has the right physical constants, like the force of gravity or the binding force of atoms, so that stars, planets and even the chemistry of life could happen at all.
But there’s another lottery you won, and you probably didn’t even know about it. You happened to be born on an unassuming, mostly harmless planet orbiting a G-type main sequence star in the habitable zone of the Milky Way.

The Milky Way is a big place, measuring up to 180,000 light years across. It contains 100 to 400 billion stars spread across this enormous volume. 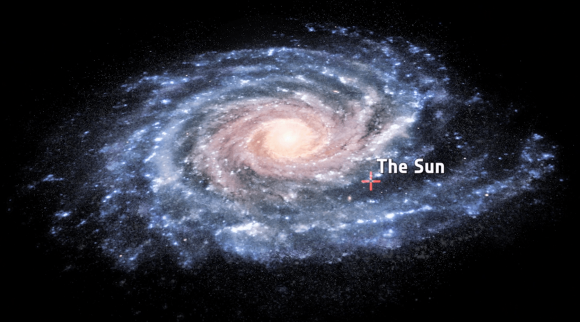 The Milky Way has some really uninhabitable zones. Down near the center of the galaxy, the density of stars is much greater. And these stars are blasting out a combined radiation that would make it much more unlikely for life to evolve.

Radiation is bad for life. But it gets worse. There’s a huge cloud of comets around the Sun known as the Oort Cloud. Some of the greatest catastrophes in history happened when these comets were kicked into a collision course with the Earth by a passing star. Closer to the galactic core, these disruptions would happen much more often.

There’s another dangerous place you don’t want to be: the galaxy’s spiral arms. These are regions of increased density in the galaxy, where star formation is much more common. And newly forming stars blast out dangerous radiation.

Fortunately, we’re far away from the spiral arms, and we orbit the center of the Milky Way in a nice circular orbit, which means we don’t cross these spiral arms very often.

Earth is known as "UNIQUE PLANET". because from the eight planets of universe , only the earth which exist life . Only in earth we find living organisms. The plants which gives us oxyzen only present on earth. Our planet earth is also save from enormous asteroids , stars ,planets ,etc.

Because it is the only plant which have our needs and everything.for example our resources.

Earth us known as a unique planet becoz it is only the planet in which life exists.
It contains all the climatic conditions to continue life.
Like it is made up of 3 spheres. They are :-
* Hydrosphere,
* Lithosphere, and
* Biosphere.
It also consists of atmosphere.
It also contains ozone layer which helps to stops the UV rays that are thrown by the sun.

Our earth is known as a unique planet becoz it is only the planet which contains life in it. None other planet contains the characteristics like that of earth...

Earth us known as a unique planet becoz it is only the planet in which life exists.
It contains all the climatic conditions to continue life.
Like it is made up of 3 spheres. They are :-
* Hydrosphere,
* Lithosphere, and
* Biosphere.
It also consists of atmosphere.
It also contains ozone layer which helps to stops the UV rays that are thrown by the sun.

It is called unique planet because it has water and air

Because only on this planer there is life

Tge earth is called the unique planet because it has air to breath , water to drink and land to live

Earth is known as an unique planet because it bear life by maintaining a proper balance between the biosphere, lithosphere and the hydrosphere.

earth is a unique planet because it is the only planet in which life exits?

Earth is known as unique planet because it is only planet on which life exists.And these happens because of :
1. Moderate Temperature
2. Presence of Water
3. Presence of Sunlight
4. Adequate amount of water
5.Presence of Oxygen and Carbon Dioxide

Because on Earth have life

because earth is the only planet in which life exist !!!!
What are you looking for?