why were ryots reluctant to grow indigo

The ryots were reluctanat to grow indigo because:-

1)The price they got for indigo was very low.

2)The cycle of loans never ended.

3)The planters insisted that indigo should be grown on the best soils.

4)Indigo had deep roots and exhausted the soil rapidly.Then the land could not be sown witn rice.The soil would become barren.

PLEASE GIVE ME A THUMBS UP

Blue Dye was in immense demand in Europe. This compelled the British to push the Indian farmers to produce more indigo instead of the food grains on their lands. This excess cultivation of indigo not only reduced the soil fertility but also made the food grains less available. Moreover, the commercial farming did not help the farmers to earn high profits. The poor farmers were unable to return the loans that were provided to them to begin the indigo farming. To pay back the loans, the peasants borrowed money from the money lenders and got trapped in the debt cycle. Above all the British authorities had given the plantation owners the free hand to oppress the farmers to secure the maximum production. Thus, the exploited peasants rose in revolt.

Ryots relucted to grow indigo because they have not any kind of profit and also indigo wants to much nutrients so that because of indigo cultivation the cultivation of rice will fail.

Because wherever Indigo was grown that piece became very unfertile

The ryots were reluctant to grow indigo cause :- 1.-they were forced to sign a contract , given cash in advance as a loan and the seed, drills required for agricultural purpose 2. - they were pressurised to cultivate 25% land under the holding

1. Under the ryoti system,the indigo planters forced the ryots to sign an agreement or contract. 2. The peasants realised that this system of growing indigo was in fqct quite oppressive. 3. The price that they got from the planters for the indigo was very low. 4. After an indigo harvest, the land could not be used for sowing rice.

Why were the rypts not willing to grow indigo?

The ryots were reluctant to grow indigo as those who signed the contract got cash advances from the planters at low rates of intrest to produce indigo and the cultivators were not having a bit of profit.

1. Peasents were forced to sign an agreement.2. If they sign an agreement they got advance cashbut in low intrest. 3. After household indigo they were not allow to grow crops on that land and that land covertwled into barren land. 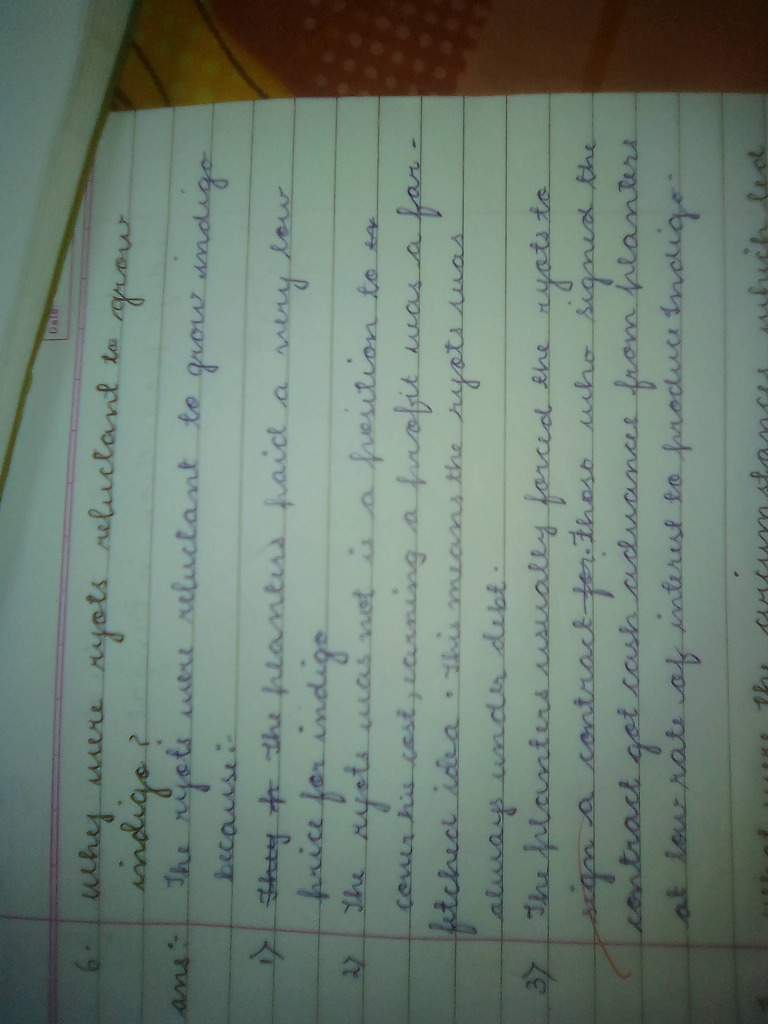 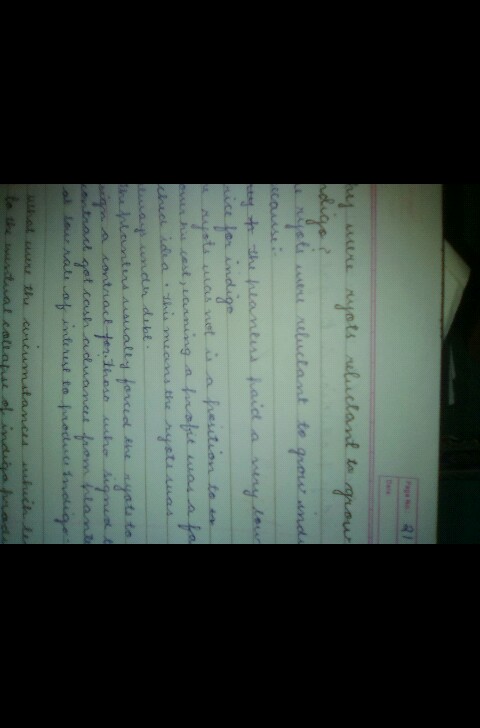 The planter paid a very low price for indigo . The ryot was not in position to even recover his cost earning ,a profit was far fetch idea .This meant that ryot was always in debate .Henve the ryot were relucant to grow indigo. 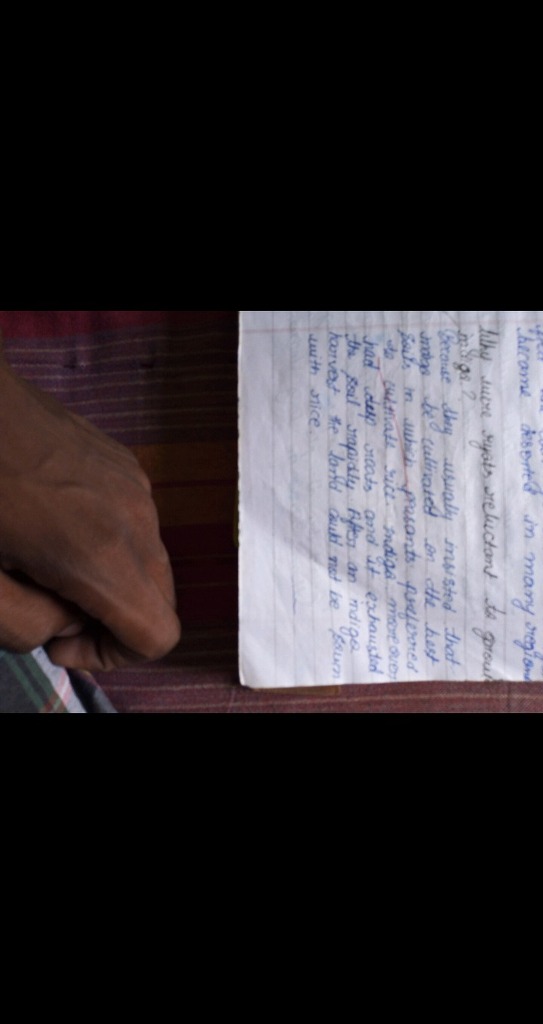 1) Under the ryoti system ryots were forced by the planters to sign a contract or a agreement(satta).
2) Those who signed the contract were given cash advances from the planters at a low rate of interest to produce indigo.
3) The planter provided with the seeds and drill, while the cultivators prepared the soil,sowed the seeds and looked after the crop
4) When the crop was delivered to the planter after the harvest,a new loan was given to them and the cycle started all over again.
5) The price they got for the indigo they produce was very low and cycle of the loan never ended.

Indigo had deep roots and exhausted the fertility of soil rapidly and after the Indigo harvest, land couldn't be sown with rice as the fertility of the land degraded.. this led to shortage of food

"Resurgence in the history of Bihar came during the struggle for India's independence. It was from Bihar that Mahatma Gandhi launched his civil-disobedience movement, which ultimately led to India's independence. At the persistent request of a farmer, Raj Kumar Shukla, from the district of Champaran, in 1917 Gandhiji took a train ride to Motihari, the district headquarters of Champaran. Here he learned, first hand, the sad plight of the indigo farmers suffering under the oppressive rule of the British. Alarmed at the tumultuous reception Gandhiji received in Champaran, the British authorities served notice on him to leave the Province of Bihar. Gandhiji refused to comply, saying that as an Indian he was free to travel anywhere in his own country. For this act of defiance he was detained in the district jail at Motihari. From his jail cell, with the help of his friend from South Africa days, C. F. Andrews, Gandhiji managed to send letters to journalists and the Viceroy of India describing what he saw in Champaran, and made formal demands for the emancipation of these people. When produced in court, the Magistrate ordered him released, but on payment of bail. Gandhiji refused to pay the bail. Instead, he indicated his preference to remain in jail under arrest. Alarmed at the huge response Gandhiji was receiving from the people of Champaran, and intimidated by the knowledge that Gandhiji had already managed to inform the Viceroy of the mistreatment of the farmers by the British plantation owners, the magistrate set him free, without payment of any bail. This was the first instance of the success of civil-disobedience as a tool to win freedom. The British received, their first "object lesson" of the power of civil-disobedience. It also made the British authorities recognize, for the first time, Gandhiji as a national leader of some consequence. What Raj Kumar Shukla had started, and the massive response people of Champaran gave to Gandhiji, catapulted his reputation throughout India. Thus, in 1917, began a series of events in a remote corner of Bihar, that ultimately led to the freedom of India in 1947.

Sir Richard Attenborough's award winning film, "Gandhi", authentically, and at some length, depicts the above episode. (Raj Kumar Shukla is not mentioned by his name in the film, however.) The two images here are from that film. The bearded gentleman, just behind Gandhiji, in the picture on the left, and on the elephant at right, is Raj Kumar Shukla.

Gandhiji, in his usual joking way, had commented that in Champaran he "found elephants just as common as bullock carts in (his native) Gujarat"!!" 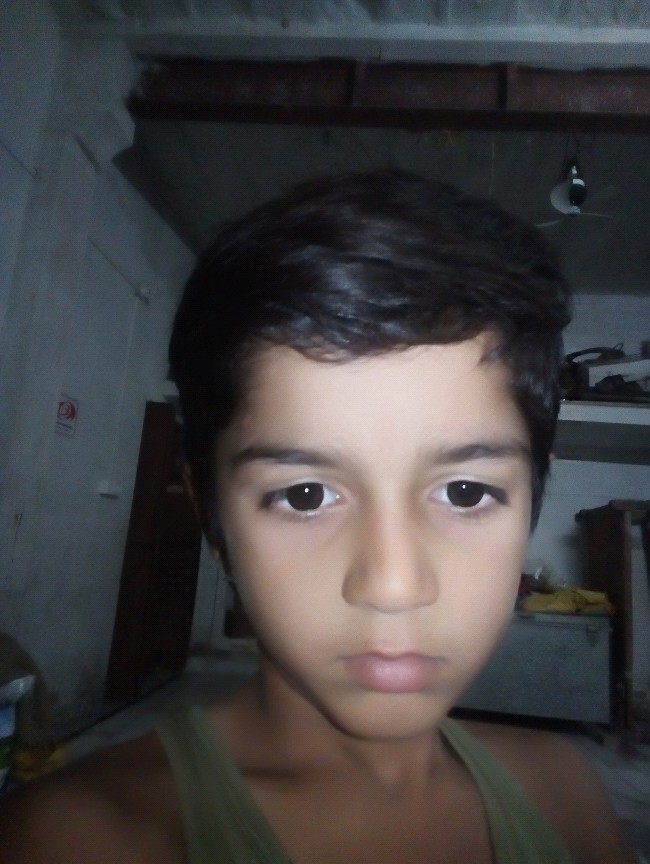 Because growing of indigo was oppressive if farmer grows it its roots were deeply penetrated while removing it loosen the soil and soil looses its complete fertility further farmers were unable to grow anything in that land and they were hired for low wages. 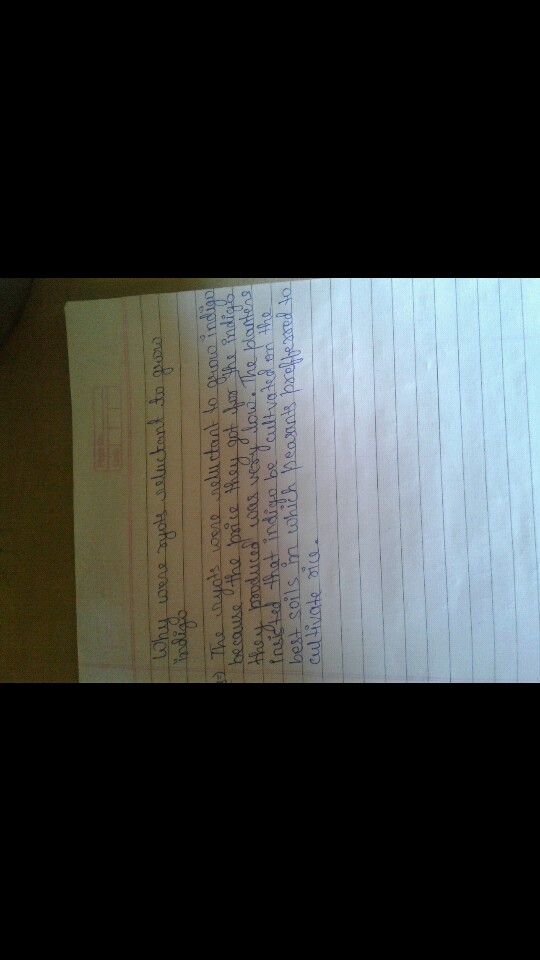 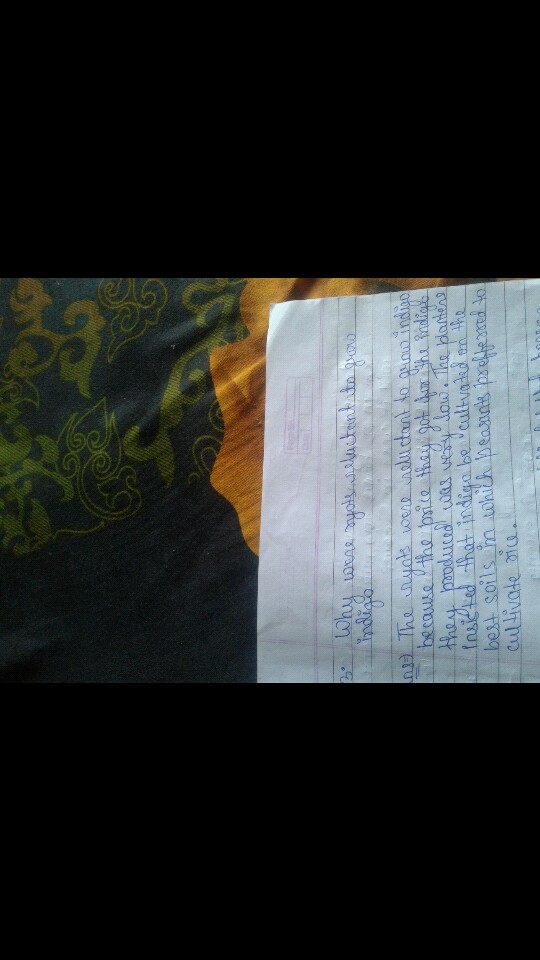 why why are you what is resilient to grow Indigo

The?ryots were reluctant to grow indigo?because the price they got for the?indigo?they produced was very low. The planters insisted that?indigo?be cultivated on the best soils in which peasants preferred to?cultivate?rice.

good for our health

THE REASONS THAT THE RYOTS WERE RELUCTANT TO GROW INDIGO WAS:
1. THE RYOTS HAVE TO GROW AND GROW AND  THE CYCLE OF LOANS NEVER ENDED.
2. THE RYOTS GOT VERY LESS SALARY COMPARED TO THEIR JOBS
3. THE CULTIVATION OF INDIGO EXHAUSTED THE SOIL FERTILITY AND THAT LAND COULD NOT BE GROWN WITH RICE. 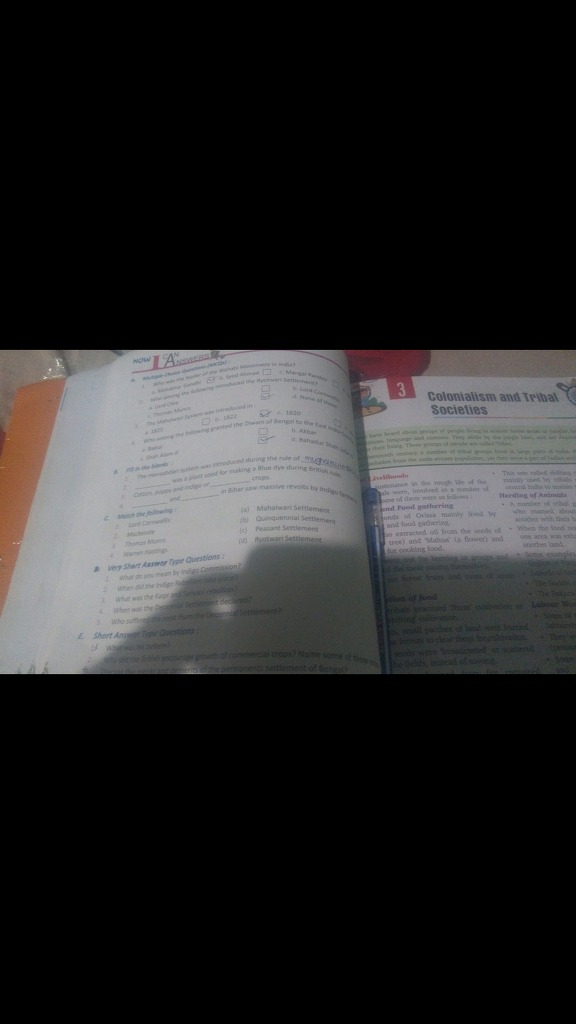 Becoz the price they got for the indigo they produced was very low.

Search it in your textbook

The ryots were reluctanat to grow indigo because:-

1)The price they got for indigo was very low.

2)The cycle of loans never ended.

3)The planters insisted that indigo should be grown on the best soils.

4)Indigo had deep roots and exhausted the soil rapidly.Then the land could not be sown witn rice.The soil would become barren.

Please give a thumbs up. Plz plz
What are you looking for?