write 15 examples each of dicots and monocots.

There are quite a few differences which exist between monocots and dicots. The primary and most important difference is that monocots consist of seeds that are a single piece-an example of which is corn, while dicot seeds can be split into two, like in the case of peas.

Another important difference is that while in monocots the flowers have petals in multiples of three, in the case of dicot these are in multiples of 4 or 5. As far as the leaves are concerned, monocots exhibit parallel veins while dicots have reticulated veins. There are many other features that distinguish the two. Take the case of the embryo for instance. As the name would suggest, and as one would imagine, an embryo in a monocot has a single cotyledon while the embryo with the dicot comes with two cotyledons. Then again in the case of monocots the pollen is with a single furrow or pore, whereas in the case of a dicot it is with three furrows or pores.

If one were to look at the difference etymologically, the number of cotyledons found in the embryo is the origin of the names Monocotyledonae (meaning one cotyledon) and Dicotyledonae (meaning two cotyledons). As discussed earlier, Monocots are primarily herbaceous plants with long, narrow leaves and parallel veins. Dicots on the other hand may be either herbaceous (tomato plant) or woody (hickory tree)

Monocots include in their number palms, grasses, onions, as well as lilies. The dicot class on the other hand consists of oaks, mustards, cacti, blueberries, as also sunflowers. The dicots are far more assorted and comprise of numerous species (170,000 and above) as compared to the monocots (65,000 and above).

The differences between the two categories of plant have always been obvious to man, but were formally categorized as such, as far back as 370 BC by Theophrastus. The terms Dicotyledon and Monocotyledon were coined by John Ray in 1682 in his work Methodus Plantrum Nova. Though we have set about explaining the differences between the two classes above, it does not follow that all plants can be neatly categorized into two classes. There are examples for monocots which will display characteristics that determine a dicot, but by and large, this is a useful system of classification in use over the last few centuries and looks set to be used that way for the foreseeable future. So next time you have your peas or corn remember that the former is a dicot while the latter is a monocot.

Summary:
1.Monocots are single seeds while dicots seeds can be split into two halves.
2. The flowers of monocots have petals in multiples of three while dicot flowers have in multiples of 4 or 5.
3.The stem vascular bundles are scattered in monocots whereas in the case of dicots these are in a ring. 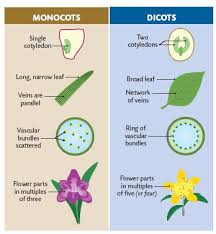