Write 3 differences between political and permanent executive.write 1 function of each

Simple answer is : All those "Angutha Chaps" who have contested elections and remain in office for a limited period of time are political executives and those who have qualified UPSC conducted Civil Services Examination studying days and nights and have specialised knowledge are called Permanent Executive. They actually advice "Angutha Chaps" and rule our country.

POLITICAL EXECUTIVE ;
1. THERE ARE DIRECTLY ELECTED BY PEOPLE .
2.THUS, THEY ARE ANSWERABLE TO PUBLIC .
3.THERE ARE NOT MUCH EDUCATED AS PERMANENT EXECUTIVE.
4. THEY ARE IN POWER ONLY ,  IF THERE IN MAJORITY BY PEOPLE(GIVEN BY PEOPLE).
5.E.G.. PLOLITICAL LEADER

**
PERMANENT EXECUTIVE
1. THERE ARE INDIRECTLY  ELECTED.
2. THUS , THEY ARE NOT ANSWERABLE TO PUBLIC.
3. THERE ENOUGH EDUCATED ON SUBJECT OF MINISTRY.
4.THEY ARE IN POWER UNTIL THEY GET RETIRE,
5.E.G.. IPS OFFICER

political executive. they are political leaders. they are elected for specific period. they in the office remain as long as pary remains in the rule. they may/may not have expert knowledge in the subject concerned. they make decision and thier decision is final. permanent executive they are civil servants belonging to civil sevices they are appointed on long term basis. they remain in thier office even when party changes. they have expert knowledge abt the subject concerned. they advice ministers in decision making

Many of your answers are wrong

political executive
1.the executive elected for a specific period of time
2.they are elected by people through direct elections
3.they make law and policies

permanent executive
1.the executive who are appointed on long term basis they remain in the office even the ruling party changes
2.they are appointed on the basis of merit and written test
3.they work under political executive

functions; political executives are responsible for governing of political communities for making laws and policies

Political executive : * They are elected

Powers of the prime minister of india

Political executive
1)The ministers are political executives.
2)They are elected by the electorate, as per the mandate of the people.
3)They serve for a span of five years and then again go for seeking mandate.

Permanent executive
1)The civil servants are the permanent executives.
2)They are selected on the basis of merit, as per the examinations taken by the Union Service Public Commission.
3)They serve till the retirement age.

what is the role of permanent and political executive

They are appointed by the government on a long term basis.
They are in charge of the 'executive ' of the policies of the government.
They are parmanent and remain in the office even when the ruling party changes.

political executive-
1 elected by the people for specific period
2 it takes major decisions
3 they remain in office for a fixed period
4 they are answerable to the people
5 takes aal the decisions and are more powerful
pemanent exacutive-
1 appointed on a long term basis
2 people working in civil services
3 they remain in office when the rulling party changes
4 not answerable to the people
5 don't take decisions and they exist the political executive and are less powerful
funcition-
poli.- thy make decision and their decision is final
perm.- they advice ministers in decision taking.

Explain the rebellion of baster and java ?

thanks u r not great 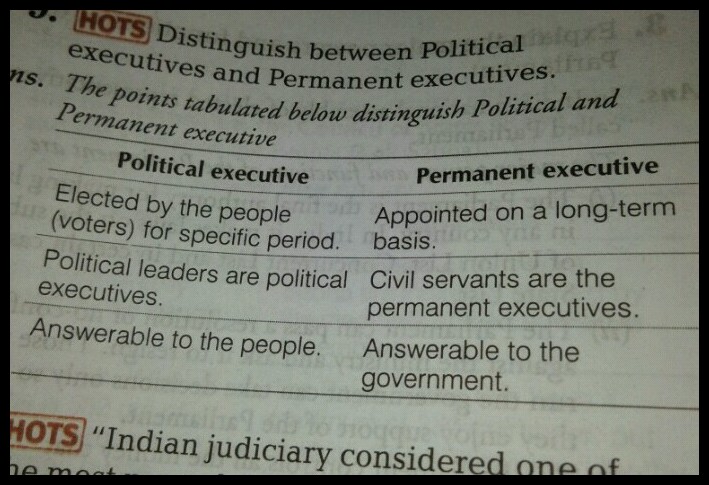 What are the function of rajya sabha

The differences between political executive and permanent executive:

permanent executive :-
1.they are appointed by the government for the work under political executive
2.they are in change of Executive of the policies of the government
3.they are permanent and remain in office even when the ruling party changes did you not change with the change in government.

DVD player is required to be the first time
What are you looking for?