write a short note on nucleus

A large, membrane-bound, usually spherical protoplasmic structure within a living cell, containing the cell's hereditary material and controlling its metabolism, growth, and reproduction.

it controls all the vital activities of the cell

the main parts of the nucleus are nucleur membrane, nucleolus, nucleoplasm and chromosomes

The nucleus is the headquarters of the cell. It regulates all cell activity. It consists of a nuclear envelope, (the outer membrane) and nucleoplasm. In the nucleoplasm you can see chromatin and the nucleolus.

The nuclear envelope is a double membrane. Is has 4 phospholipid layers. It is also has large pores through which materials pass back and forth.

Within the nucleus are found chromatin and a structure called the nucleolus. Chromatin is DNA in its active form. It consists of DNA looped around histone proteins. The nucleolus is a knot of chromatin. It is the nucleolus that manufactures ribosomes

The nucleus regulates all cell activity. It does this by controlling the enzymes present. The chromatin is composed of DNA. DNA contains the information for the production of proteins. This information is encoded in the 4 DNA bases. Adenine, thymine, cytocine, and guanine. The specific sequence of these bases tells the cell what order to put the amino acids.
There are three processes that enable the cell to manufacture protein:
Replication allows the nucleus to make exact copies of its DNA
Transcription allows the cell to make RNA working copies of its DNA
In translation the Messenger RNA is used to line up amino acids into a protein molecule

The nucleus is a membrane bound structure that contains the cell's hereditary information and controls the cell's growth and reproduction. It is commonly the most prominent organelle in the cell.

The nucleus is surrounded by a structure called the nuclear envelope. This membrane separates the contents of the nucleus from the cytoplasm. The cell's chromosomes are also housed within the nucleus. Chromosomes contain DNA which provides the genetic information necessary for the production of other cell components and for the reproduction of life.

Acell nucleusis the part of thecellwhich contains thegeneticcode, theDNA, and theRNA. It also controls the activities in a cell. The nucleus is small and round, and it works as the cell's control center. It contains x-shaped "duffel bags" calledchromosomes, and inside the chromosomes are DNA strands.

It consists of the x- shaped duffel bags called chromosomes

this site is use full

Give me a short answer

The prominent spherical structure present within a living cell is the nucleus, which is controlling center of the cell. A typical eukaryotic nucleus is separated from cytoplasm by nuclear membrane. It is a double membrane structure possessing complicated nuclear pores, which provides direct connection between neucleus and cytoplasm.

The viscous liquid present within the nucleus is the nucleoplasm, which contains very much coiled chromatins threads that condense to appear as chromosomes during cell division and a spherical nucleolus. Chromatin threads are differentiated interest odark stained regions called heterochromatin and lightly stained regions called euchromatin an interphase nucleus. Nucleus possesses the chromosomes (DNA) in which all the informations are coded and are carried to cytoplasm by mRNA through the nuclear pores and decoded into proteins to control all the cellular activities. Nucleolus is the seat for biogenesis of RNA.

The nucles plays a central role in cellular division
It has a double layered membrane.
The nuclear membrane have pores which allow the transfer of materials.
It contains rodshaped structures called chromosomes
It is acidic in nature. Any basic stain can be used to see the nucleus.
It is also present in prokaryotes, but it lacks a well-defined membrane.
Generally, one nucleus is present in a cell; however, there are certain eukaryotic cells which do not contain even a single nucleus (e.g., red blood cell) and there are certain others that contain more than one nucleus i.e. they are multinucleate (e.g., slime mould).
In some organisms like bacteria, the nuclear region of the cell may be poorly defined due to the absence of a nuclear membrane. Such an undefined nuclear region containing only nucleic acids is called the nucleoid. It is found in prokaryote
nside the nucleus, rod-shaped structures called chromosomes are present. These chromosomes bear the hereditary units known as genes. Genes are the segments of DNA which provide information for carrying out the regular metabolic activity of a cell. For example, DNA contains the information on how to make the proteins of the cells. The proteins, in turn, control the chemical reactions of the cells and provide structural support to both the cells and tissues. The nucleus also plays a crucial part, along with the environment, in determining the way a cell will develop and the form that it will exhibit at maturity by directing the chemical activities of the cell. Thus, also known as the director of a cell.
Functions of the nucleus:

The nucleus controls all metabolic activities of a cell.

It is concerned with the transmission of hereditary traits from the parent to the offspring.
It plays an important role in cellular reproduction?the process by which a single cell divides to form two new cells.

It also plays a crucial part in determining the way a cell will develop and the form it will exhibit at maturity. It does this by directing the chemical activities of the cell.

Chromatin network: The nucleus contains the genetic material of an organism in the form of a network of chromatin. DNA gets associated with protein molecules to form chromatin. This chromatin gets folded and coiled to form chromosomes.
?

NUCLEUS IS THE MAIN THING OF CELL. IT HELPS CELL TO GROW. IT PROVIDE METABOLIC INFORMATION TO CELL.

Prominent, spherical or oval structure controlling all the cell activities.

Nucleus is one of the main part of cell.It directly or indirectly controls all the functions happened in cell.It contain all 23 pairs of chromosomes. It controls the cell division. 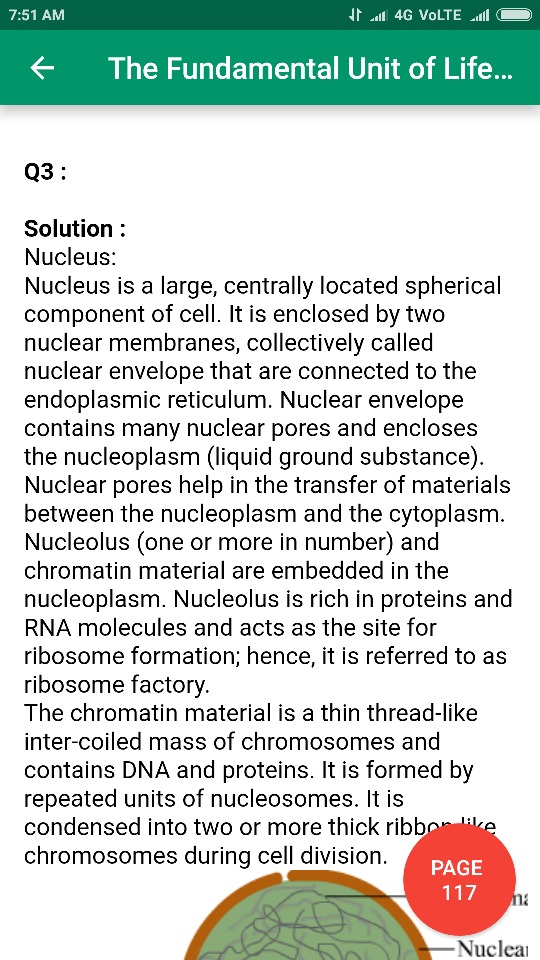 This is your answer A double membrane bound cell organelle whose shape depends on the shape of the cell. The membrane is porous and contain chromatic fibres and nucleolus suspended in nucleoplasm. Controls cell's functions,helps in transmission of characters one generation in nucleoplasm

The nucleus is a membrane bound structure that contains the cell's hereditary information and controls the cell's growth and reproduction. It is commonly the most prominent organelle in the cell. The nucleus is surrounded by a structure called the nuclear envelope. This membrane separates the contents of the nucleus from the cytoplasm. The cell's chromosomes are also housed within the nucleus. Chromosomes contain DNA which provides the genetic information necessary for the production of other cell components and for the reproduction of life.
What are you looking for?