It is not always possible to tell the exact outcome of a particular action. Take, for example, a dart board. 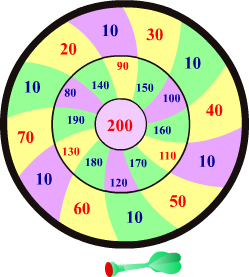 A dart is repeatedly thrown toward the dartboard, targeting a random number in each throw. We do not know which number is targeted in a particular throw. What we do know is that there is a fixed group of numbers and each time the targeted number is one of them.

We know that the likelihood of occurrence of an unpredictable event is studied under the theory of probability. So, we can say that there is a certain probability for each number to be targeted in the above experiment.

Let us learn more about probability and the meanings of terms associated with it, for example, ‘experiment’ and ‘outcome’.

The word ‘probability’ has evolved from the Latin word ‘probabilitas’, which can be considered to have the same meaning as the word ‘probity’. In olden days in Europe, ‘probity’ was a measure of authority of a witness in a legal case, and it often correlated with the nobility of the witness.

The modern meaning of probability, however, focuses on the statistical observation of the likelihood of occurrence of an event.

Probability is widely applicable in daily life and in researches pertaining to different fields. It is an important factor in the diverse worlds of share market, philosophy, artificial intelligence or machine learning, statistics, etc. All gambling is based on probability. In gambling, one considers all possibilities and then tries to predict a result that is most likely to happen. The concept of probability is perhaps the most interesting topic to discuss in mathematics.

Experiment: When an operation is planned and done under controlled conditions, it is known as an experiment. For example, tossing a coin, throwing a die, drawing a card from a pack of playing cards without seeing, etc., are all experiments. A chance experiment is one in which the result is unknown or not predetermined.

Trial: A trial is an action or an experiment that results in one or several outcomes. For example, if a coin is tossed five times, then each toss of the coin is called a trial.

Event: The event of an experiment is one or more outcomes of the experiment. For example, tossing a coin and getting a head or a tail is an event. Throwing a die and getting a face marked with an odd number (i.e., 1, 3 or 5) or an even number (2, 4 or 6) is also an event.

Initially, the word ‘probable’ meant the same as the word ‘approvable’ and was used in the same sense to support or approve of opinions and actions. Any action described as ‘probable’ was considered the most likely and sensible action to be taken by a rational and sensible person.

Equally Likely: If each outcome of an experiment has the same probability of occurring, then the outcomes are said to be equally likely outcomes.

Girolamo Cardano (1501−1576) was a great Italian mathematician, physicist, astrologer and gambler. His interest in gambling led him to do more research on the concept of probability and formulate its rules. He was often short of money and kept himself solvent through his gambling skills. He was also a very good chess player. He wrote a book named Liber de Ludo Aleae. In this book about games of chance, he propounded the basic concepts of probability.

A fair die is thrown. What is the sample space of this experiment?

We know that sample space is the collection of all possible outcomes of an experiment.