What are simple machines and terminologies

A machine is a device through which we can either overcome a large resistive force present at some point by applying a small force at a specific point in a desired direction or obtain a gain in speed.

Simple machines can be broadly classified into two categories.

These two types are further divided into sub-categories, as shown in the given diagram.

A lever is a rod which moves freely about a fixed point called the fulcrum.

Parts of a Lever

Levers are of three types depending on the position of the fulcrum, load and effort.

Lever of first order: Fulcrum is situated between the load and the effort. E.g., see-saw, crowbar, beam balance

Lever of second order: Load is situated between the fulcrum and the effort. E.g., mango-cutter, wheel barrow, nut cracker

Lever of third order: Effort is situated between load and the fulcrum. E.g, pair of tongs, fishing rod

An inclined plane provides a sloping surface over which heavy things can easily be lifted or rolled down. 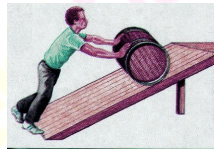 There are certain common terms that are used for almost every simple machine. Let us understand these terminologies first.