Refraction of light and speed of light

Ankit went to an optician and noticed different types of spectacles there. He observed that while the glasses of some spectacles were relatively thicker in the middle, other glasses were thicker on the edge. The glasses of these spectacles are examples of lenses.

A lens is a transparent material bound by two curved surfaces. Lenses are broadly classified into two categories depending on their surfaces. 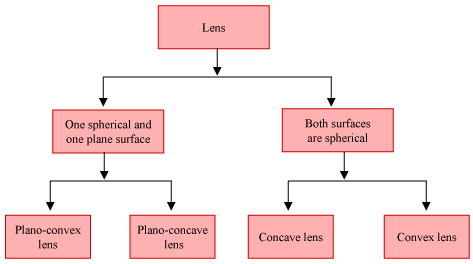 However, we will discuss only double spherical lenses here.

A convex lens is made by joining two spherical surfaces in such a way that it is thicker at the centre. Its thickness gradually reduces as we move towards the edge. 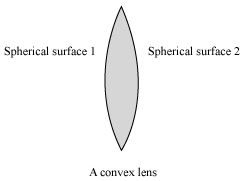 A convex lens has the ability to converge the light rays to a point that are incident on it. Thus, it is called a converging lens.

A concave lens is made by joining two curved surfaces in such a way that it is thinner at the centre. Its thickness gradually increases as we move towards the edge. 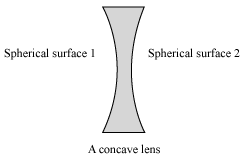 A concave lens has the ability to diverge a beam of light rays incident on it. Thus, it is called a diverging lens.

Differences between a spherical mirror and a lens

The second difference arises due to the fact that a lens has two spherical surfaces (i.e. it can be made from the arc of two spheres of equal radius).Therefore, light is refracted twice before it comes out of the lens.

Optical centre is a point at the centre of the lens. It always lies inside the lens and not on the surface. It is denoted by ‘O’.

It is the centre point of arcs of the two spheres from which the given spherical lens (concave or convex) is made. Since a lens constitutes two spherical surfaces, it has two centers of curvature.

The distance of the optical centre from either of the centre of curvatures is termed as the radius of curvature.

The imaginary straight line joining the two centers of curvature and the optical centre (O) is called the principal axis of the lens.

Hold a convex lens and direct it against the sunlight. You will find a bright spot appear on the wall. Can you explain the formation of this bright spot? Light, after refracting through the lens, converges at a very sharp point. Try to obtain the brightest possible spot. Now, place a paper on the wall and observe what happens in the next few minutes.

The focus (F) is the point on the principal axis of a lens where all incident parallel rays, after refraction from the lens meet or appear to diverge from. For lenses there are two foci (F1 and F2) depending on the direction of incident rays.

The distance between the focus (F1 or F2) and the optical centre (O) is known as the focal length of the lens.

Refraction by a spherical lens can be categorized into three cases.

Case I. When the incident light ray is parallel to the principal axis

In this case, the refracted ray will pass through the second focus F2 for a convex lens, and appear to diverge from the first focus F1 for a concave lens.

Case II. When the incident light ray emerges from the first focus F1 of a convex lens, or appears to emerge from the second focus F2 of a concave lens

In this case, light after refraction from both the lenses will move parallel to the principal axis.

Case III. When the light ray passes through the optical centre (O) of a lens

In this case, the light ray will pass through both the lenses without suffering any deviation.

Chandu was surprised when he came to know that white light is actually a combination of lights of different colours.

On rainy days, you see a rainbow in the sky. You must have seen colours reflecting on the surface of a compact disc (CD) in the presence of sunlight. You might have wondered where these colours come from.

The common point among the above examples is the presence of sunlight. To understand these phenomena, it is necessary to learn about the composition of sunlight.

Let us first go through an activity.

So, you have learned that light emitted by the sun is composed of seven different colours. These colours are red, orange, yellow, green, blue, indigo and violet.

You can remember the seven colours of sunlight by the mnemonic VIBGYOR. Each letter represents the initial letters of the colours.