Types of Respiration (Group B)

Do you think plants also respire like other organisms? If so, then how do plants take in oxygen?

Just like all other living organisms, plants too respire. They respire through the tiny pores on the surface of their leaves called stomata. Oxygen enters the plant, while carbon dioxide leaves the plant through these pores.

The roots of plants also respire.

They do so by taking in oxygen from the air spaces present in soil by the process of diffusion. Oxygen is taken in and carbon dioxide moves out with the help of diffusion only. This type of gaseous exchange takes place in the younger roots only, and not in the older roots. In the older roots, the exchange of gases occurs by lenticels. The lenticels are thin walled loosely arranged cells with intercellular spaces present for gaseous exchange.

In plants growing in mangroves or saline swamps, the root is modified to pneumatophores. They bear breathing pores (lenticels) and emerge out of the soil for gaseous exchange. 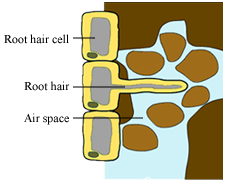 In some trees, the trunk of the trees bear small openings called lenticels. Through these openings in the bark, gaseous  exchange takes place. The lenticels look like scars on the tree bark.

Can you tell why farmers are advised against adding too much water to their fields?

They are advised to do so because too much water fills up the air spaces present in soil by replacing the air in it. Lack of  oxygen can lead to the death of plants.

Take a potted plant and keep watering it continuously for a week with more than the required amount of water.

What do you observe after a week? Does the plant survive? What is the reason behind your observation?

You will observe that the plant does not look healthy. This is because excess water blocks the pores of soil and does not allow oxygen to enter the plant body.

Large forests are called the ‘lungs of the world’ because the oxygen produced by plants is used by humans and animals for respiration.

1. Take about 6-7 germinating seeds of pea or gram and remove their outer layer (testa)

so that diffusion of CO2…