If somebody calls you from behind, you will quickly turn around. What makes you do so?

How do you realize that an alarm bell is ringing?

So, what is sound?

Sound is a form energy that produces the sensation of hearing in our ears and vibrating bodies produce sound.

Do you know how a sound is produced? To find out, let us perform the following activities.

Take a cooking utensil and pour some water in it. Now, beat the utensil with a rod. You will hear a sound. Carefully, observe the surface of water in the utensil. Do you see concentric circles moving on the water surface? These are vibrations in water, produced by vibrations of the utensil body, on beating.

Therefore, it can be concluded that a vibrating body produces sound.

The back and forth movement of an object produces sound. An object moving back and forth is said to be in vibration. Hence, sound is produced by vibrating objects.

We have two ears to hear the different sounds that are around us—the soft purring of a cat, the loud barking of a dog, the tinkling of a bell, the blaring of a horn, etc. Our ears detect all types of sounds lying in the hearing range and send sound signals to the brain. In this lesson, we will learn about the working of the human ear.

Structure of the Human Ear

The ear is one of the five sensory organs of the human body. It can sense sound waves from various sources. Take a look at this figure to know the various parts of the human ear. 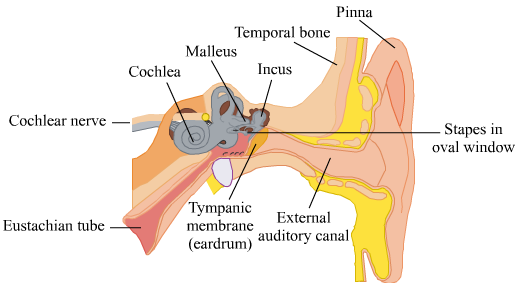 The human ear consists of three main parts—the outer ear, the middle ear and the inner ear. The following chart shows these three parts and their sub-parts.

The stirrup bone of the middle ear is the smallest bone in the human body.

Parts of the Human Ear with Their Functions

The following table lists the functions of the different parts of the human ear.

Working of the Human Ear

The cochlea is a circular or snail-shaped, fluid-filled bone containing hair cells. Sound vibrations in the cochlea cause the hair cells to bend. As a result, electrical impulses get generated. These are then are carried to the brain by the auditory nerve. Consequently, sound is heard.

The Eustachian tube allows the middle ear fluids to drain and enables air to enter it from the throat.