1. Name The Microorganism And The Group To Which It Belongs .
2. Name The Food Item On Which The Organism Grows .
3. Does It Grow Well In Dry Or In Moist Conditions ?
4. Is It Safe To Eat Infected Bread ? 1) The picture is of a fungus called - Rhizopus or commonly called Bread Mould. It belongs to the kingdom - Fungi of Mucoraceae family.
2) Generally grows on bread, therefore known as bread mould
Description about the fungus
The bread mold grows in the form of fine threads and form cottony masses on the surface of things such as bread and cheese. These threads are called hyphae. Some of the hyphae are root-like and grow downwards (rhizoid) while some may grow upwards from the surface. The black dots seen on the contaminated bread are actually their spore sacs (sporangium) present at the tip of the hyphae. The sexual and asexual reproduction of fungi takes place via these spores. 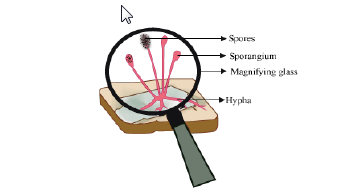 3) The spores require moisture and warm conditions for their growth.  Thus bread moulds grows on moist bread as it provides favorable conditions, and not on dry bread.

4) No, it is not safe to eat infected bread, as it cause many diseases and harmful to humans.

It is fungus. It is found in bread and it is not safe to eat yes it grow in dry and wet conditions
What are you looking for?