A stone is
thrown with the
help of a sling
with initial
velocity v at an
angle theta from
the horizontal.
a) Working of sling is based on...........
law of vector addition. (1)
b) With the help of a vector diagram,
state this law. (1)
c) Derive the expression for the
maximum height reached by

Yes, the sling based on parallelogram law of vector. 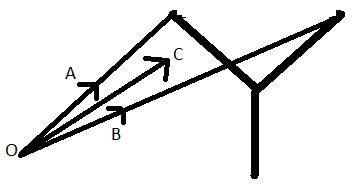 The sling consist of two two rubber strings AO and BO which are attached with Y-shaped wooden frame. When a stone is held at point O and the junction of the two string on the rubber band is pulled, then the tension T1 and T2 are produced along OA and OB. According to parallelogram law of forces, the resultant tension T of the two tensions act on the stone along OC. As the stone is released, it shoots under the action of resultant tension T in forward direction.