MINERAL RESOURCES in Jammu Kashmir -Coal occurs in Poonch, Rajauri and Udhampur-gypsum in Baramula, Kathua, Leh, Poonch, Pulwama, Rajauri, Srinagar and Udhampur-Magnesite in Leh and Udhampur-bauxite, ball clay, and china clay in UdhampurMagnesite is magnesium carbonate, MgCO3. Iron (as Fe2+) substitutes for magnesium (Mg) with a complete solution series with siderite, FeCO3. Calcium, manganese, cobalt, and nickel may also occur in small amounts. Dolomite, (Mg,Ca)CO3, is almost indistinguishable from magnesite. Magnesite can be used as a slag former in steelmaking furnaces, in conjunction with lime, in order to protect the magnesium oxide lining. It can also be used as a catalyst and filler in the production of synthetic rubber and in the preparation of magnesium chemicals and fertilizers.Similar to the production of lime, magnesite can be burned in the presence of charcoal to produce MgO, otherwise known as periclase. Such periclase is an important product in refractory materials. Magnesite can also be used as a binder in flooring material. In fire assay, magnesite cupels can be used for cupellation as the magnesite cupel will resist the high temperatures involved.Other minerals that occur in the state are 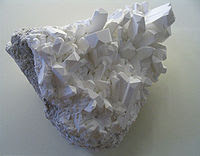 borax
View Full Answer
What are you looking for?