The basis for grouping organisms into five kingdoms is as follows:

(i) On the basis of the presence or absence of membrane-bound organelles, all living organisms are divided into two broad categories of eukaryotes and prokaryotes. This division lead to the formation of kingdom Monera, which includes all prokaryotes.

(iii) Animals are then separated on the basis of the absence of a cell wall. 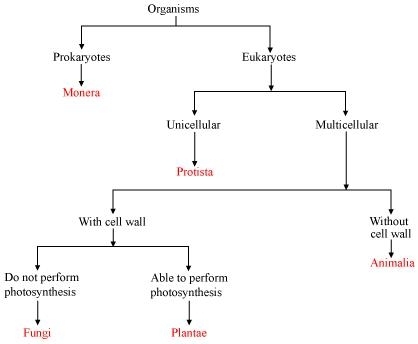 2 CARL WOESE  introduced a modification in Whittaker classification by dividing Monera into Archaebacteria and Eubacteria.

Further classification is done by naming the sub groups at various levels as given below:

This is termed as the Hierarchy of Classification